The Internet Interdisciplinary Institute (IN3) was created during the 1999-2000 academic year with the aim of bringing UOC research together to focus on new technologies and their impact on all areas of human activity and society. Thus, from the start, the IN3 has centred its research work on the knowledge society.

The term “knowledge society” has no single definition recognized throughout the entire scientific community. To understand what we mean by this term, we refer to “La dimensión cultural de Internet” (The cultural dimension of Internet)[1], written by professor Manuel Castells in 2002, in which the term knowledge society is defined in the following way:

“A society in which the conditions for knowledge generation and information processing have been substantially altered by a technological revolution centred on information processing, knowledge generation and information technologies. This does not mean that technology is the determining factor; technology is always developed in relation to social, institutional, economic and cultural contexts, among others. But what distinguishes the past 10 or 15 years is really a paradigm shift much like the one that occurred during the Industrial Revolution (…) It constitutes a new kind of paradigm affecting all processes of society, politics, war, and economy (…) within the whole of human activity.”

Evident in this definition is the interrelationship of two “fields” or “disciplinary blocks” often distanced from each other: on the one hand, the fields of engineering – especially ICT engineering – that contributed to the technological revolution initiated in the final decades of the twentieth century, and, on the other hand, the various sciences that study human activity – social sciences, life sciences, humanities, art, etc. – and that, in this document, are referred to generically as the human sciences.

It is clear, then, that the IN3 is dedicated to carrying out its research in an intrinsically interdisciplinary (as well as cross-disciplinary, whenever possible) fashion, as a necessary result of these two ways of interpreting reality.

It is also worth noting that, historically, “knowledge society” is not the only term that has been used to refer to this concept. Initially the term “information society” was used, as well as “network society”. These terms are often used interchangeably in scientific literature and are considered equivalent in this document, even though nuances and differences between them may be found. However, since information and knowledge are common factors in any society at any time in history, we believe that the “network society” best describes the purpose of the IN3’s research. “Network” is understood to refer to ICT and Internet technologies that have brought about the paradigm shift described by Professor Castells, in a situation comparable to that which caused the Industrial Revolution in Western society during the second half of the 18th century.

Therefore, we believe that interdisciplinarity that does not break down the existing barriers between the human and engineering sciences would not adequately reflect the Institute’s research goals. That is why we have decided to openly commit to an inter- (and even cross-) disciplinary approach that will necessarily embrace and overcome this disciplinary division.

Having outlined the what, or rather, the direction in which IN3 groups will align their efforts, it is time to shed some light on how we plan to overcome the disciplinary barrier that has thus far impeded IN3 research from breaking through disciplinary blocks and escaping the comfort zone.

Firstly, it is worth noting that we believe groups should leave their comfort zones as a necessary sacrifice so that the Institute can stand out, create a well-known brand and become a leader and success story. Without neglecting the classic indicators that should represent the goals of all scientific institutions, gaining a competitive edge that puts the IN3 on the research map, both locally and internationally, requires a qualitative leap that can only be achieved by taking on certain risks. It is obvious that, due to critical mass, with closed disciplinary spaces the IN3 will never stand out or compete in the shadow of other, more powerful, established and prestigious institutions with greater resources. Compensating for this weakness (lack of critical mass) and turning it into an opportunity (heterogeneity, interdisciplinarity) should be one of the Institute’s main strategic impulses. 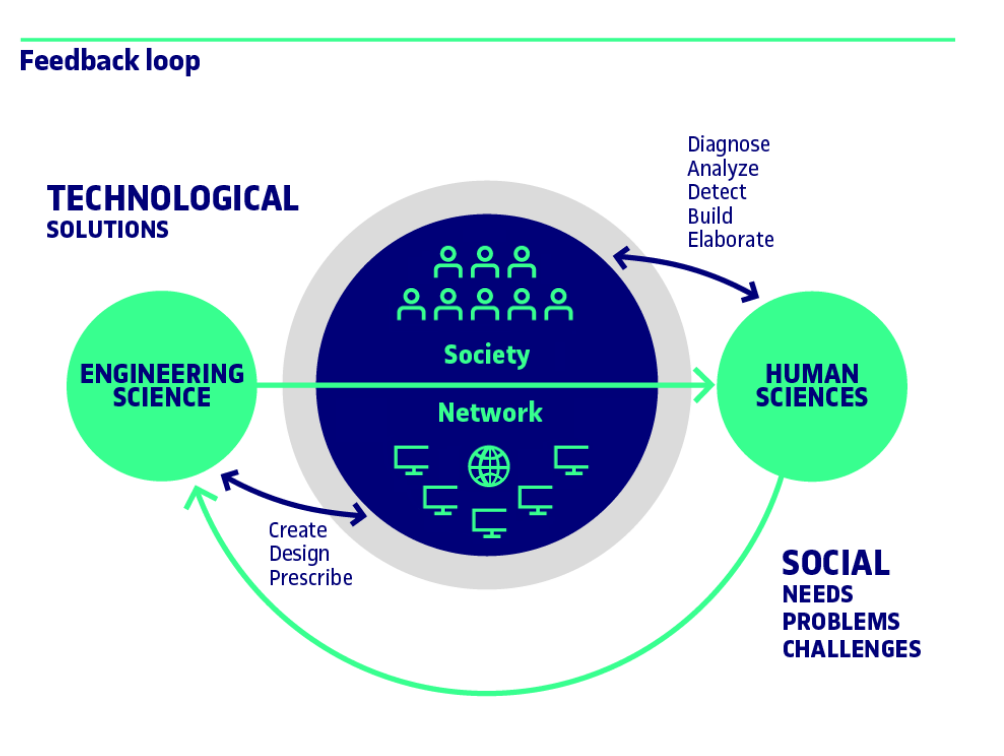 How can we break down this disciplinary barrier? Firstly, by considering what we can do currently to combine the expertise of both blocks in the development of joint research projects. On the one hand, within the sciences of engineering, new technologies that constitute the Internet of the future are created, designed and prescribed. On the other hand, the human sciences diagnose and analyse society, which allows us to detect its needs and demands. This simplified vision of the two blocks allows us to carry out research that combines both kinds of expertise, as shown in Figure 1. This figure represents how the human and engineering sciences can collaborate on interdisciplinary projects that have a social impact in the context of the network society. Engineers provide technological solutions that respond to social needs, challenges and problems, while the analyses carried out by the human sciences serve to identify new needs and demands and to carry out studies on ICT’s impact on society, both direct and indirect. 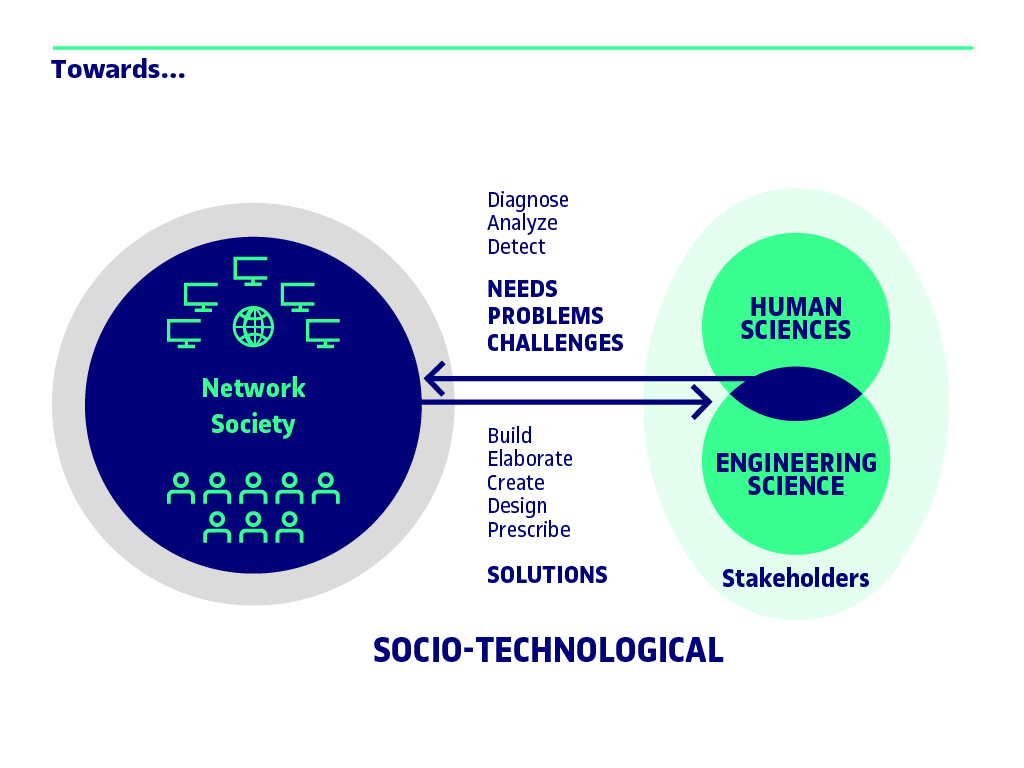 This outline allows us to immediately create collaboration areas that overcome the barrier between the two disciplinary blocks through transversal projects. Nevertheless, this way of working entails a certain division of roles (“compartmentalization”), which is not ideal and does not reflect the interdisciplinary nature of the network society. This solution should allow us to move towards the integration of various disciplines (“antidisciplinarity”) in solving the socio-technological challenges of the network society, as shown in Figure 2.

Once this disciplinary division has been broken down, the IN3 will stand out thanks to cross-disciplinary and interdisciplinary research by hybrid teams composed of researchers from both engineering and human sciences. They will also count on the participation of stakeholders from society to define research challenges based on society’s needs and demands, as well as to assess the social impact of the research developed within the IN3 framework.