The UOC breaks gender stereotypes at the Youth Mobile Festival 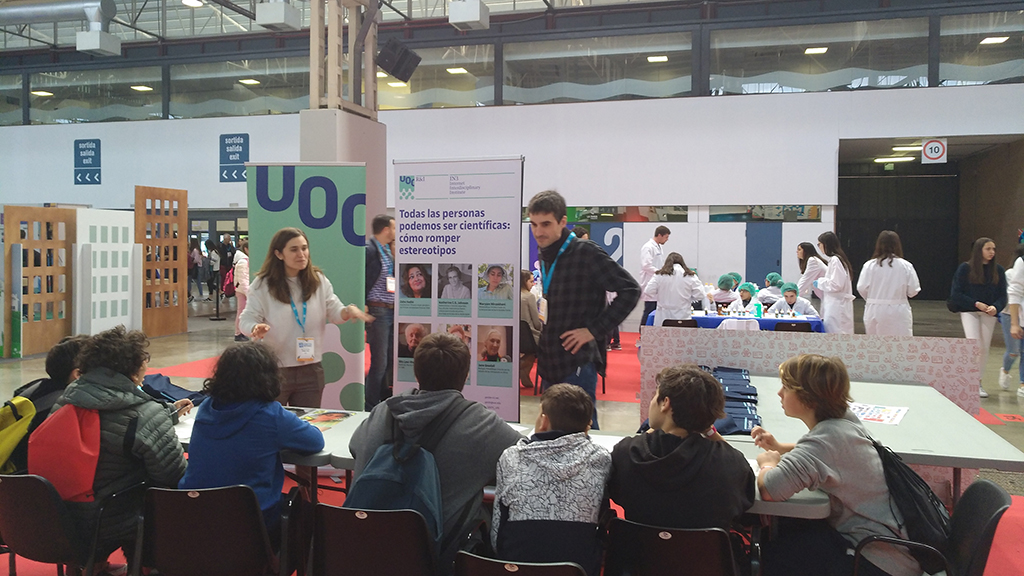 The Gender and ICT research group ran the ?All of Us Can Be Scientists: Breaking Stereotypes? workshop at YoMo Barcelona

María del Carmen Gallego and Efrem Melián, both members of the Internet Interdisciplinary Institute (IN3) Gender and ICT: Researching Gender in the Network Society (GenTIC) research group, attended the Youth Mobile Festival Science+Tech Meets Mobile (YoMo Barcelona) on 1 March to run a workshop for schoolchildren on gender stereotypes in the STEM (science, technology, engineering and mathematics) professions. Gallego pointed out that “young people are increasingly aware of gender stereotypes in their everyday lives”.

Over 50 schoolchildren aged between 10 and 16 were at the UOC space to take part in the “All of Us Can Be Scientists: Breaking Stereotypes” workshop to try to identify the professions of six women by analysing a series of photographs. Students were instructed to simply say what professions came to mind on first seeing the images. The photographs were of key women in science and technology: primatologist Jane Goodall; architect Zaha Hadid, the first woman to win the Pritzker Architecture Prize, regarded as this field's “Nobel Prize”; Rita Levi-Montalcini, neuroscientist and Nobel prizewinner for medicine; Katherine Johnson, physicist, space scientist and mathematician, who calculated the trajectory of Apollo-11 on its journey to the Moon; Maryam Mirzakhani, mathematician and first woman to win the prestigious Fields Medal; and Núria Oliver, telecommunications engineer at the Massachusetts Institute of Technology (MIT). Overall, the children associated the photographs with professions related to care and education. To close the activity, participants were told about the professional achievements of the six women, who were completely unknown to them.

“Witnessing the collective imaginary of the students who took part in our workshop, we became aware of how much the idea of men as geniuses in science and technology still prevails,” said Gallego. “Women are linked with medicine and mathematics, but they don’t appear as eminent. We still face the challenge of giving visibility to women’s genius in all fields, but young people are increasingly more aware of stereotypes,” she added. “Being with kids is always really refreshing. The joint reflection we engaged in during the workshop leads me to believe that notable progress is being made in terms of the shared perception of the need to overcome all the different kinds of restrictive frameworks formed by gender norms,” said Melián.

The origin of stereotypes

The two UOC researchers told the young people present that stereotypes, as socially agreed beliefs, influence the decisions we take when choosing courses and, subsequently, careers. “These beliefs have no empirical basis and are especially persistent in gender and are often conveyed by the family, teachers or the media from the moment we’re born”, Melián explained. The researchers encouraged the students to take these determinants into account and to work in the professions they wanted to, regardless of social norms or gender roles, since, as the title of the workshop stated, “all of us can be scientists”.

YoMo Barcelona, part of the Mobile World Congress, was held in La Farga de L’Hospitalet de Llobregat from 26 February and 2 March. This science and technology exhibition was visited by over 22,000 school-age children, who enjoyed live theatre performances, interactive workshops and dozens of hands-on activities. YoMo is designed to take learning out of the classroom and into real life by showing the exciting, fulfilling professional opportunities on offer in the mobile and STEM sectors.