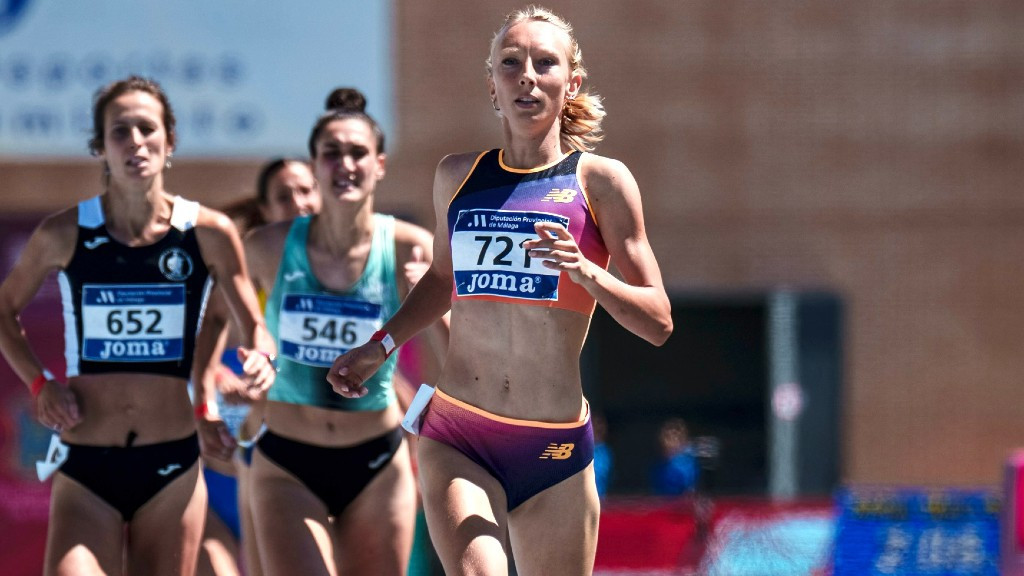 Zoya Naumov (Sant Cugat, Bellaterra, 1995) is one of the elite athletes to have studied at the Universitat Oberta de Catalunya (UOC). A track athlete and 800 metres specialist, the former Spanish champion is currently training to secure a spot at the Paris 2024 Olympics. With a bachelor's degree in Psychology from the Universitat Autònoma de Barcelona and a Master's Degree in Educational Guidance from the UOC, Naumov explained to us in this interview how she combines her careers in athletics and psychology and how she has had to overcome obstacles to get to where she is now, especially healthwise.

How did you start off in the world of sport? What was the turning point that made you decide to become a professional athlete?

I started training at the age of nine, and at 17 began training as a high-performance athlete. Also at 17, I took part in my first international championships (the European Juniors) and, shortly afterwards, became the Spanish Under-23 champion. After spending a year in the US on a grant, I decided to become a professional athlete, combining this with my psychology studies. In 2018, I became overall Spanish champion and secured a sponsorship deal with New Balance the following year.

Health issues have been a constant challenge for you in your career.

I'd had intestinal problems for some time, and my immune system wasn't working properly, added to which I had injuries and underwent surgery. Right before the Tokyo 2020 Olympics, I decided to take a break to see if my body would recover with a rest. After seeing a lot of professionals, I began working with an osteopath and a specialist in Eastern medicine. They put me on a very restrictive diet (with no lactose, gluten, fructose or sorbitol for 16 months) and they also found that some of the metals in my teeth's amalgam fillings could be having an inflammatory effect on me. Slowly but surely, I gradually returned to training and competing.

The fact is that it's been quite a psychological hurdle to overcome in this period, added to which I've gone through some personal issues. In January this year I had a fairly serious anxiety attack, and it was difficult to combine my sporting career with my studies. I want to talk about this because mental health is at last becoming a more visible issue, particularly the impact it has on our overall well-being. I managed to move on thanks to the help of specialist professionals (two psychologists) and my support network (friends, family and coach).

"I had a fairly serious anxiety attack, and it was difficult to combine my sporting career with my studies."

Do you think it's important for athletes to study?

When you're a top athlete, you have two lives. When you reach the end of your professional career (which, in my discipline, is at around 30 to 35 years old), you go through a mourning process. Having academic qualifications helps you move on. It's vitally important to have an education, as it's something else you can rely on when your "first life" comes to an end. These days, the philosophy of coaches is to prioritize lifelong learning. As a matter of fact, my bachelor's degree in Psychology final project focused on how this dual career (sports and studying) affects athletes' well-being.

"It's vitally important to have an education, as it's something else you can rely on when your 'first life' comes to an end."

How do you combine your careers as a psychologist and as an athlete?

It's quite the juggling act… Sometimes I train twice a day, but there's a lot more time put in as well: resting properly, physio sessions, making sure you eat right… Being an athlete is a 24/7 job. What's more, you're always competing in meets. Everything adds up to a huge amount of hours, and it's not easy combining it all.

After completing my master's degree at the UOC, I specialized in educational guidance and have worked in various fields: sex education, eating disorders, school bullying, drug prevention… and I've also provided guidance to other sportspeople. I can only work part-time, at most, because sports take up so much of my life. When you're a professional athlete, it's difficult to find professional projects that can be adapted to your circumstances.

How was your experience at the UOC? Would you recommend this way of studying to other top athletes?

We high-level sportspeople have tight schedules, a lot of travel… Being able to study online gives you a great deal of flexibility because you don't have to go anywhere and can rest more. With the recent pandemic, we've been able to appreciate the advantages of studying online even more.

Until just a few years ago, sportswomen had a very low profile in the media and in society. Although things are changing, do you feel there's still a way to go?

Absolutely. In the States I saw how, there, athletes are better recognized and their work is really appreciated. Here, football overshadows everything else. There are only a few of us elite sportspeople and things are not always made easy for us. There have been cases in which schools or universities with no sporting links have refused to change exam dates, for example. Thankfully, things appear to be slowly changing. Being a high-level athlete gives you tools like the ability to cope, adaptability, discipline and passion, which are later transferable to the labour market and the academic world. More importance should be attached to the value we contribute to society. Luckily enough, there's now a fitness and sports boom, whose benefits are becoming increasingly noted in society.

What are your short- and medium-term goals?

A short while ago, I embarked upon a new stage in my career at Madrid's High Performance Centre and I'm very happy with the change. I've been given facilities that I couldn't have access to previously for bureaucratic reasons. In the short term, I want to ensure continuity in my sporting career and remain healthy. I want to improve on my fourth position in the Spanish Championships and win back my title. And, after that, I want to work on getting to the Paris Olympic Games, two years from now. At the same time, I want to continue combining my careers as an athlete and a psychologist, as I really enjoy my work.

Your mother is Catalan and your father Russian. What are your thoughts on what's happening in Russia and the war with Ukraine?

I'm not the right person to give an opinion on a conflict of this size because I lack information, like most people. What I can say is that war is never welcome, and I'm very much against what's happening. It's also true there's a lot of disinformation about everything. People on both sides are suffering (in Ukraine, most of all, but also in Russia). In my opinion, it's not a war between two territories, but rather there are international geopolitical and economic interests at play. The result? Normal people are paying the price, like my fellow-athletes in exile or even participating in the war (in Ukraine and Russia, elite athletes are in the armed forces). From a systemic standpoint, the harm that's being done between these peoples will last for generations and that's what's worst: the hatred. All in all, it's just sad and I hope with all my heart it comes to an end as soon as possible.

"In Ukraine and Russia, elite athletes are in the armed forces."