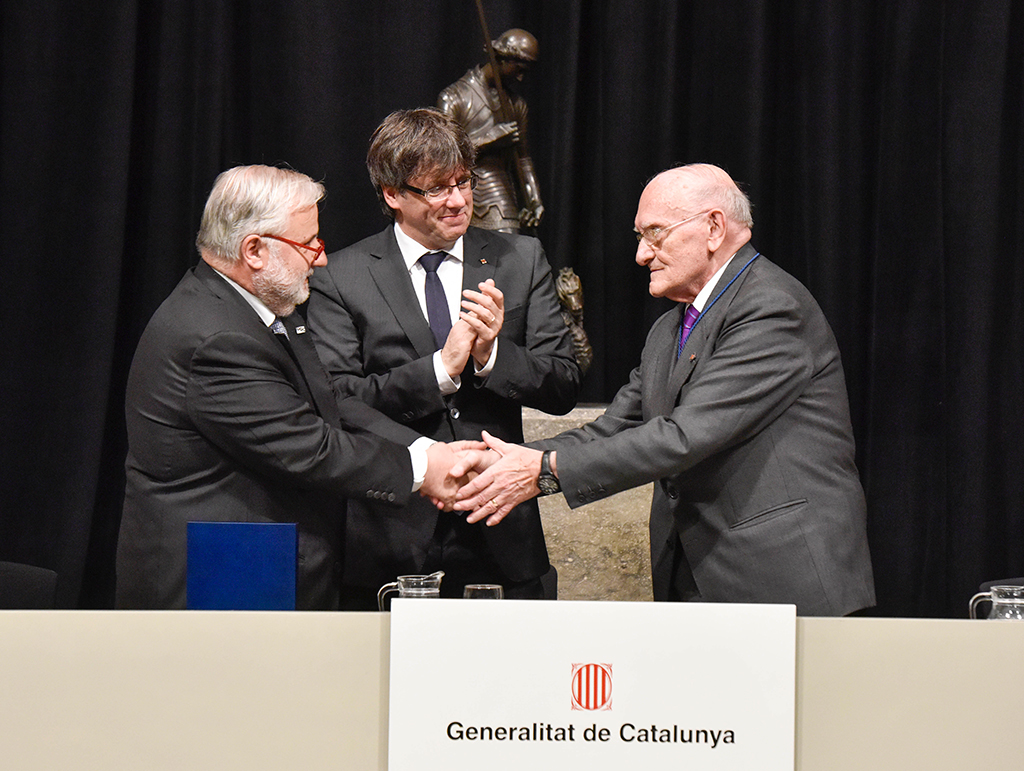 This Tuesday, more than 200 people attended the event to pay tribute to the founding president of the Universitat Oberta de Catalunya

The Sant Jordi hall of the Palau de la Generalitat was the venue this Tuesday for the tribute paid by the UOC to its founding president, Gabriel Ferraté. Commissioned by the Government of Catalonia, he devised and created the Universitat Oberta de Catalunya in 1994, and was its president for ten years (1995-2005). He accepted the challenge under the condition that they would allow him to create a different university: “We wanted to break down the barriers of space and time using new technologies”, Ferraté recalled in the event presided by the President of the Government of Catalonia, Carles Puigdemont. Also present were the Secretary for Universities and Research, Arcadi Navarro, and the President of the UOC, Josep A. Planell, who reminded those present that “without Ferraté there would be no UOC”.

The President of the Government of Catalonia, Carles Puigdemont, described him as a “learned person, scientist, humanist, academic and entrepreneur”, who brought the future forward with the creation of the UOC in 1994, at a time when “connectivity was not as evident as it is today and fewer than 5% of households had an Internet connection”. “His brilliant mind understood that the future would have to be in that civilization and in that culture which was emerging,” he added.

The head of government expressed his “profound admiration” for Ferraté and remarked that “in the idea of creating the UOC there is something we could call disruptive culture”. In this regard, the president underlined that the Catalonia of today “is the heir of many disruptive ideas and will be indebted to them in the future”.

The Universitat Oberta de Catalunya was the first in the world to be fully conceived on the Internet, as Navarro pointed out this afternoon. In the words of Ferraté, "the UOC breathed life into a project – better still, an idea – that some people did not quite understand and that many others viewed with scepticism, but which we all tackled with a level of ambition and excitement that was directly proportional to the greatness of the challenge”. In the first academic year, from September 1995 to July 1996, two hundred students enrolled on the only two qualifications offered: Business Studies and the second-cycle degree in Educational Psychology.

For Ferraté, his greatest honour is seeing that “what started as a project, has today established itself, has grown and has a guaranteed future in Catalonia and in the world”. Furthermore, it is an honour that he wishes to share with all the people who made the creation of the UOC possible and all the people who have allowed it to continue. “In particular, this medal honours all the professors, all the academic and administrative managers, all the administrative employees and all the students who have made it and are making it possible.”

The Medal of Honour also rewards “a mentality which is – and rightly so – a sign of the identity of this nation: that of the open, revitalizing and brave Catalonia, associated with social, cultural, scientific and technological progress, which uses all of this to educate the people of its nation,” the founding president concluded.


The great commitments of Ferraté

According to Planell, “Doctor Ferraté understood that digitalizing did not mean adding a coat of technological varnish, but having the opportunity to rethink education, diversify the role of the teaching staff and put the skills and requirements of the students at the centre”. More than 60,000 graduates of the UOC “have experienced the success of this educational model, based on mentoring and adapted to the specific educational needs of the student”.

Josep A. Planell also referred to the success of the founding president in his great commitment to research. Ferraté set up the Internet Interdisciplinary Institute (IN3), managed by Manuel Castells, the University’s research centre specialized in analysing the impact of ICTs on various aspects of society. From then until the present day, research is a core part of the University, which today has 43 research groups, the Doctoral School and also the eLearn Center. “We are convinced that teaching and research must serve society in order to facilitate, connect, exchange and generate talent,” Planell says.

The UOC was created with a particular model of governance, as a public service university with a private management model, committed to Catalonia by assuming a clear mandate and by being accountable to Parliament. “A national structure, a scalable and exportable model, an element for connecting knowledge and talent. All of this is because of an educational model based on proximity, on involvement, on continuous improvement,” Josep A. Planell concluded.

In February this year, the Executive Board of the UOC unanimously agreed, at the proposal of the President Planell, to award the University Medal of Honour to Gabriel Ferraté for his vision of an “innovative and disruptive university which pointed out, for the first time in 1994, that the student is the centre of the educational model and that education must continue throughout life”. This is the highest distinction of the University and was awarded for the first time today.

Born in Reus in 1932, Dr Gabriel Ferraté is an industrial engineer and agricultural expert. His professional, scientific and research activity has focused on the areas of computer science, automatic control, and robotics.

He has been a member of the Executive Committee of the International Federation of Automatic Control (IFAC), director of the Institut de Cibernètica, and vice-chairman of the Government of Catalonia's Inter-ministerial Council for Research and Technological Innovation (CIRIT). He has also been president of the Institut Cerdà. He has been awarded honorary doctorates by the Universidad Politécnica de Madrid and the University of Lleida.