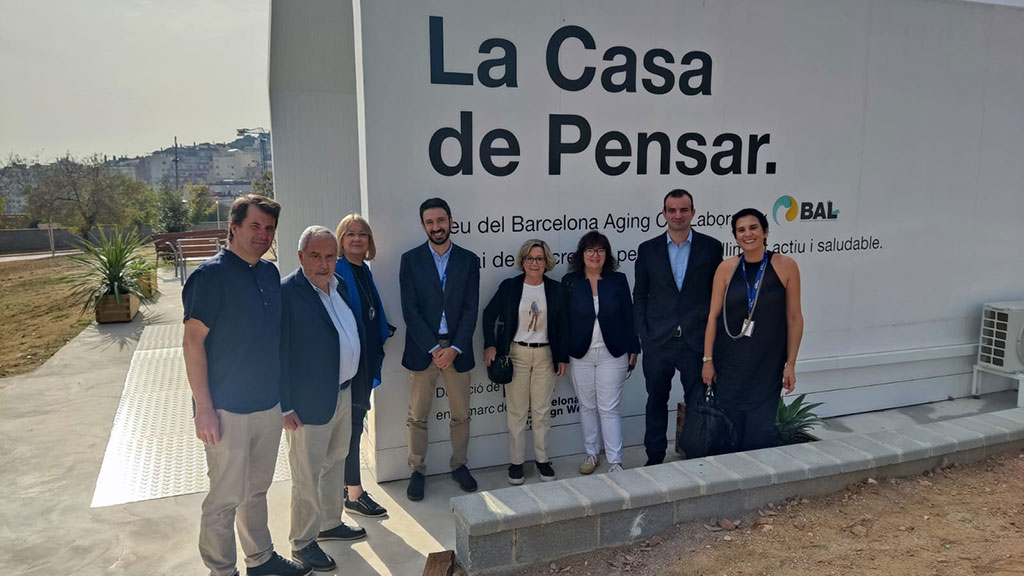 The Barcelona Aging coLLaboratory (BALL) aims to create, in partnership with end users, innovative solutions to enhance the quality of life, healthcare and social care of older people

BALL's first project, unveiled today at Barcelona's Pere Virgili hospital, is a humanoid robot that can assist patients unable to feed themselves on their own, providing them with a solution tailor-made for their needs

Ageing with the best possible quality of life, healthcare and social care: this is the chief mission of the Barcelona Aging coLLaboratory (BALL), Catalonia's first Living Lab focusing on delivering innovative solutions for older people backed by a wide range of civil society stakeholders.

Today, Pere Virgili hospital was host to the media launch of BALL's physical headquarters and its very first project: a humanoid robot designed to help those unable to feed themselves. The robot is being co-created with end users, who play a crucial role in helping understand what they need so they can be given a solution that fits their requirements.

As well as providing patients with a personalized tool and greater autonomy, the robot will automate some of the most complex logistical aspects of care in hospitals and residential centres, reducing the strain on healthcare workers, streamlining processes and optimizing the quality of service.

The UOC, one of the ten founder institutions

BALL will be registered with the UOC's eHealth Center, which will form part, along with the other founding partners, of the Living Lab's Strategy Committee, be an active driver of its programmes and participate in a range of its digital health projects. "For the eHealth Center, forming part of this initiative provides an opportunity to increase the social return, transfer and impact of its activities," explained one of BALL's leading ideologues and architects, Marco Inzitari, a researcher and member of the UOC's Faculty of Health Sciences.

The Strategy Committee members representing the UOC are Inzitari, who also heads both the Integrated Care and Research department at Pere Virgili hospital and the Barcelona Ageing, Fragility and Transitions research group (RE-FiT Bcn) at the Vall d'Hebron Research Institute (VHIR); and Carme Carrion, associate dean for research at the UOC's Faculty of Health Sciences and an eHealth Center research coordinator. Additionally, Daniel López, researcher at the CARENet research group at the UOC's IN3, who has been part of the project since its very beginnings, will remain an active participant in it.

According to Inzitari, the UOC is a pioneering university in digital technology, in terms of not only teaching, but also research and capacity for innovation. "Forming part of BALL means being part of an ecosystem that is representative of society, being able to add value and supporting the engagement of older people as active partners with whom we can detect new needs and co-design solutions for enhancing their quality of life. What's more, it has allowed us to further knowledge transfer and innovation."

BALL, a platform for innovation around ageing

Catalonia's population continues to age at a growing pace, and it is estimated that by 2050 one of every three people in the region will be over 65. What's more, according to figures from the Statistical Institute of Catalonia (IDESCAT), if the current care model remains unchanged, the old-age dependency ratio will also rise, from 2021's 28.9% to 44.3% by 2040.

The Barcelona Aging coLLaboratory (BALL) was created in response to the need to develop innovative solutions that make progress towards active, healthy ageing and regard old age as an opportunity for both achieving a more inclusive society and boosting the economy.

The project operates within a so-called quadruple helix innovation framework, in which different organizations and members of a community (civil society, industry, academia and government) come together to build solutions capable of promoting a territory's socio-economic growth.

"BALL is, in fact, a space or methodology for co-creation that engages older people, from the very outset, in the design, development, implementation and assessment of products and services aimed at fostering their independence, integrating them within the community and reducing dependence and chronicity," explained Dr Marco Inzitari. He added that "at a time when life expectancy is continuing to increase, but not quality of life, the end goal of the Living Lab is to make people the centre of attention and help them take control of their health and of their lives."

A robot that improves older people's autonomy at mealtimes

The robot's first prototype, unveiled yesterday, has been tailored at both a software and a hardware level to assist those who have difficulties feeding themselves. Designed by researchers at the IRI, as part of the Open Care Robotics Laboratory (LabORA), and professionals from Pere Virgili hospital, its creation has benefited from the input of all the organizations forming part of the Living Lab. Additionally, February saw participatory sessions with professionals and older people at Pere Virgili hospital, where they set out the requirements they felt the robot needed to fulfil to make it more human. Their contributions were of great value in producing this prototype.

Soon, patients at this hospital with a range of difficulties that make it impossible to feed themselves will be participating in the first pilot test for this prototype humanoid robot in a real-world hospital environment, which is where the robot will initially be used.

In this phase of the test, a group of professionals will hold interviews with the older people to gauge their degree of satisfaction, in addition to observing at first hand non-verbal reactions during the test. Their responses will very much be taken into account in the final development of the project. For the moment, the robot is very simple but, in the future, amongst other functions, it could recognize older people's facial expressions and interact with them verbally.

According to its creators, the robot should help improve patients' relational autonomy at mealtimes, offering a wider choice (in a meal's pace, type and quantity) and a better self-image (increasing self-confidence when it comes to eating), and affording greater scope in terms of dialogue (fostering forms of negotiation around how and what they eat). Another advantage of using robots is that care professionals will be able to obtain a great deal of information on the current nutritional state of each older person, thus allowing for further personalization of health and social care, adapting it to every individuals' own needs and circumstances.

It should also be remembered that providing meals creates a high-pressure environment due to the workload arising from older people's dependence, especially now, when we are witnessing both an increase in admissions of patients requiring a great deal of care and shortages of professionals in centres. "Our goal with the robot is to be in a position to provide patients with more thorough and personalized care and reduce the strain on healthcare professionals," stated Dr Inzitari. Additionally, it should be borne in mind that the project's goal is for the robot to act in support of care staff rather than as a replacement for them, meaning that it would never be left alone with a older patient.

Josep Carné, president of the non-profit federation Fatec, which is made up of volunteers and brings together Catalan older people's associations, said that "even though the idea of a robot feeding older people may initially be somewhat off-putting, we cannot turn our back on technological advances, especially if they are designed to help us." Furthermore, Carné welcomed the fact that users have played a key role in defining the robots' features.

The BALL's facilities: a house for thinking

BALL's facilities are located within the grounds of Pere Virgili hospital and will be the venue for a range of participatory processes. They will host brainstorming sessions with all the stakeholders involved in ageing (patients, professionals, research institutions, public administrations, private enterprise, etc.) to determine the main challenges in the field. Sessions will also be held to find innovative solutions to these challenges and participative dynamics to develop them with end users. 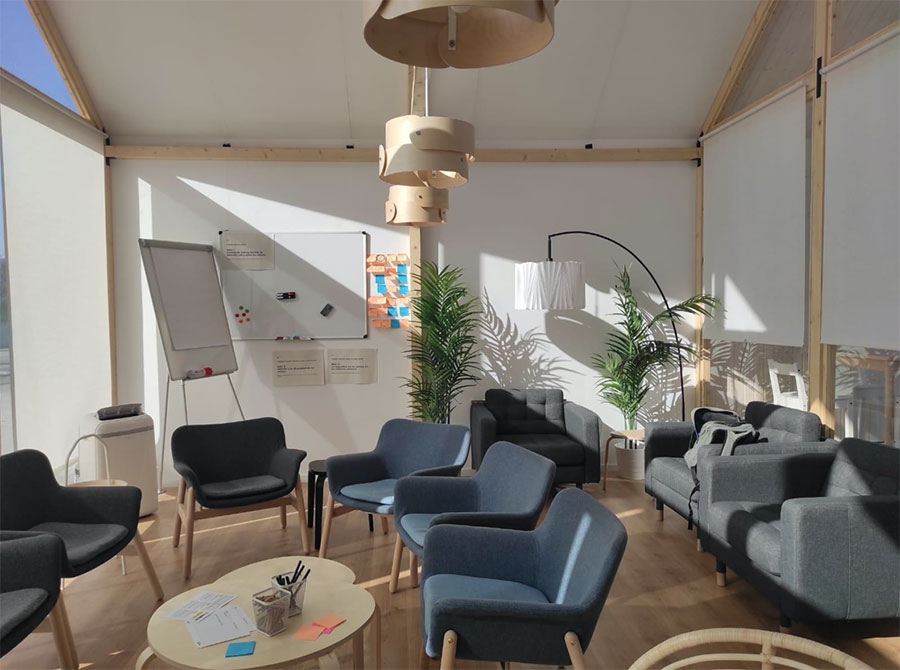 The people behind this first ageing-focused Living Lab, which will be officially inaugurated on 17 November, call on public administrations, NGOs and the voluntary sector, the business sector and the general public to submit suggestions and ideas for stimulating, mould-breaking partnerships in the field of ageing. 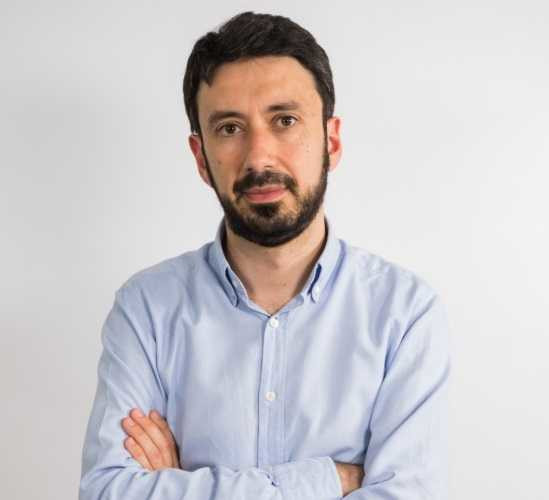 Researcher and member of the UOC's Faculty of Health Sciences