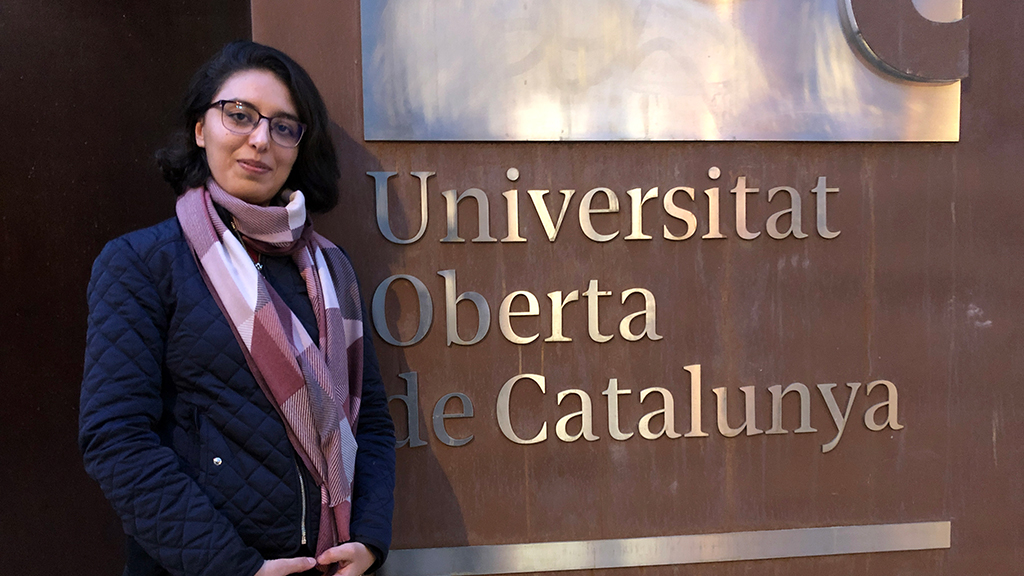 14/11/2019
Roger Cassany
Samia Oukemeni, expert in internet security and privacy and graduate of the UOC's Doctoral Programme in Network and Information Technologies

Born in Tangier, Morocco, thirty-two years of age and a Barcelona resident for the last three, Samia Oukemeni has just defended her doctoral thesis on privacy on social media, for which she has developed an algorithm tool that assesses internet privacy. This tool can help users learn to be more cautious as well as aid provider companies in implementing new and more secure systems. "The tool is not yet available to the public; it still has to be perfected", she explained with pride, confessing that she hasn't finished yet and that she wants to carry on studying and working on it, probably through a post-doctoral programme. In this interview, Oukemeni gives details of her research, talks about what she did before studying at the UOC and coming to Barcelona, and ends by giving us sound expert advice: "Before you post anything on social media, stop and think a minute".

You did your bachelor's and master's degrees in Morocco. What was it that led to Barcelona?

It's quite a funny story actually. While I was writing my master's thesis in Morocco, I decided I wanted to carry on with my research beyond the thesis, as the subject really interested me. In other words, I wanted to do a doctoral programme. And it was precisely when I was wondering where to do it that I retrieved two of the articles I'd read on the subject that I most liked, both in terms of what they said and the way they were written and set out. And it turned out they were by UOC students. So, I checked to see if the UOC, which I'd not heard of, offered doctoral programmes, and it turned out it did. I sent in my application, they interviewed me, I followed the whole process and I got in!

And you chose to come and live in Barcelona.

Well, what happened is that they offered me two options. The first was to do the doctoral degree over five years and completely online, without having to come to Barcelona. The second was to do it over three years, also doing the classes online, but in Barcelona, on-site, with a working group and the chance of a scholarship. I wanted to focus a lot on the programme, putting all my energy into it, so, as you can imagine, I went for the second option.

What does the thesis you just defended tackle?

The area I work in, in general terms, is information security, but more specifically, I've focused on privacy. People sometimes think that security and privacy have a strange or complex relationship, but the truth is that to protect your privacy, you need security. In other words, they're two complementary concepts.

Yes, that's right, I've focused on information privacy on online social media. The reason is simple: the data that these social media (such as Twitter, Facebook and Instagram) have and gather about each of us are massive. And we don't know what they do with these data or how they use them. They're like a black hole and we know very little about them. Often, we unsuspectingly join these social media networks because we want to be in touch with friends and family, but we don't know a thing about what they do with our private information. We're not aware. And that's scary. Specifically, I've worked on assessing privacy on Twitter to be able to give users an idea of how their data are used. The key question I ask myself is this: what price do users have to pay (price in the form of personal data) to be able to have a Twitter account?

And what conclusion have you drawn?

To begin with, I should say that I've only focused on Twitter, for the time being, because information is open on this social medium. Everyone can see everyone else's tweets, you just have to look behind the curtain. I've assessed lots of aspects relating to privacy, such as the architecture, design, encryption and settings options. And out of all that, I've developed a tool that uses algorithms to measure the level of privacy and quantify it. The principal conclusion to come out of it all is that we, the users, say that our privacy on social media matters. However, when we say that it matters, that doesn't mean we do anything to protect it. It's a great paradox, the privacy paradox: we say it matters but, generally speaking, we do nothing about it.

Do most users have precisely this profile you've just described?

Not all of them, but many of them do. There are three types of user. The first are the ones who couldn't care less about their privacy; the second are the ones for whom it's relatively important; and the third are those who are very concerned with it and want to protect it. As regards the users in the last two groups – the ones with some interest in protecting themselves – what's most interesting is that most of them don't know how to do it. The tool I'm proposing could help them. And it could also help them to better understand what privacy means on social media, what dimension privacy takes on the internet, so that they can learn to be more cautious. But the same tool can also help provider companies. In terms of the assessment the tool gives, ultimately, it gives recommendations, for everyone: providers and users. And providers can use this information to improve and stand out from the competition by putting new solutions in place.

Is this tool accessible? Is it on the market?

No, not yet! It isn't yet because it still needs improving and has to evolve. In the future, I'd like it to be available to people, but at the moment it's just for academic purposes, and in any event, it's early days yet.

Do you think it's dangerous not to protect yourself on social media?

I think it is, to some extent. For example, there's the Please Rob Me website, where the only thing it does is analyse the public information that each user posts on Twitter, especially geolocations. And just by doing that it can automatically conclude whether a user is at home or not, and even if there might be someone else there. All of this information is public. We don't know who might be using this information. That's worrying, don't you think? Obviously, this website isn't trying to steal from your home; it's a website that aims to warn of the dangers of not protecting yourself, which is why it's ironically called please rob me. There's a dark side to social media that you need to be aware of every time you share things.

Can you give us any advice?

One simple piece of advice is: before you post anything on social media, stop and think a minute. The simple action of stopping and thinking a moment is in itself a very effective system of prevention and protection. It may seem absurd, but it's the most important thing of all: think before sharing.

It might be a stereotype, but your area of research, in other words, technology and communications, has traditionally been very much a male area…

Well, in all honesty, I've never felt that there's anything I couldn't or shouldn't do as a woman. Perhaps that's because I was lucky enough to grow up in a family that helped me break down all the gender stereotypes ever since I was little. What's interesting is that when I studied for my bachelor's degree at university in Morocco, out of 20 students, over half of us were women; however, when I came to Barcelona, in 2016, in my area there were, effectively, very few women! I was surprised then, just as I am when I introduce myself and say that I'm studying on a doctoral programme or that I'm conducting research and people very often assume that I work in social sciences, without even inquiring about it. Someone once said to me: "But you're a girl, how come you're doing a doctoral programme in information technologies?" I've come to realize that there's actually little interest in technology among women here, and it really surprises me. But I trust and I hope that, little by little, these prejudices will disappear altogether.