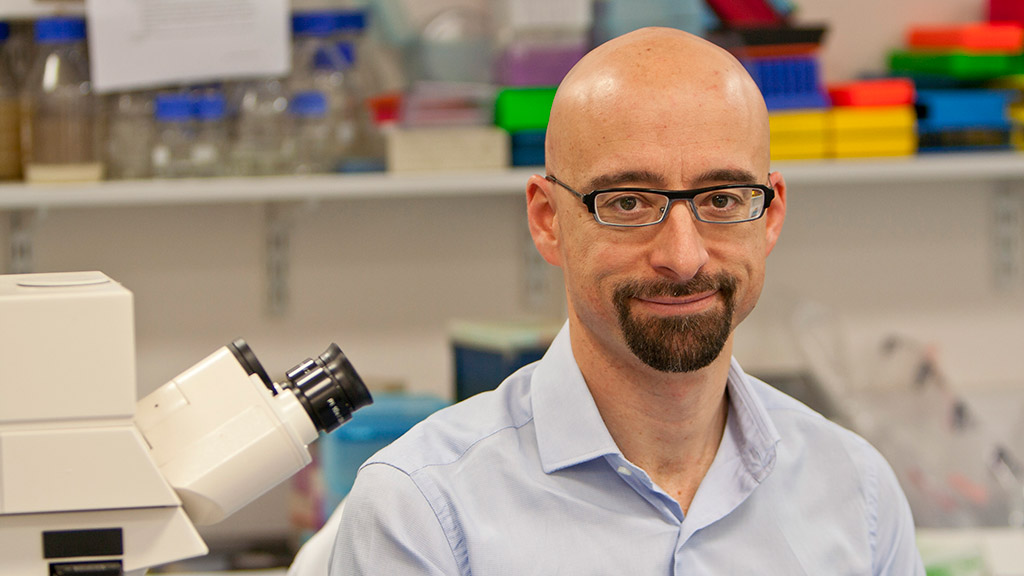 "Decisions are often made based on political rather than scientific criteria, and that's really dangerous."

"The 2009 swine flu, was a warning, because it had relatively few consequences, but we took no notice."

Salvador Macip, professor at the UOC Faculty of Health Sciences

Salvador Macip (Blanes, 1970) is a doctor of medicine, researcher and writer. Just a few days ago, on 1 March to be exact, he joined the UOC as a professor at the Faculty of Health Sciences. He has lived in Leicester since 2008, where he leads a research group on cancer and ageing at the University of Leicester and is associate professor in the Department of Molecular and Cell Biology. He has published novels, children's books, stories and nine popular science books. Among others, he has won the European Award for the Popularization of Science for Playing God, which he wrote with Chris Willmott, who is also co-author of his new book, Viurem per sempre? (Eumo, 2020). In these times of masks, confinement and state of alarm due to the coronavirus, two of his earlier books, Les grans epidèmies modernes (La Campana, 2010) and Enemigos microscópicos (Materia, 2016), are more in the spotlight than ever. In fact, the former is being reissued having been out of print.

March 2009: a little boy sneezes in a Mexican village. Two months later thousands of people are infected all over the world and we're counting the dead. An A(H1N1) flu pandemic has broken out, with unforeseeable consequences. That's the synopsis of your book Les grans epidèmies modernes (La Campana, 2010), but it could just as easily be a media report on COVID-19. Is reality stranger than fiction?

The crisis we're living through now seems like something right out of a book, but the truth is that experts have been warning of a pandemic of this type for years. Actually, fiction always feeds on this truth, which most people maybe don't know. We all need more basic scientific knowledge so that these things don't take us by surprise.

Did the health authorities underestimate the coronavirus, how quickly it spreads and its virulence among the elderly, with the experiences of China and Italy so recent?

I think they should have observed more closely what was happening in countries that were ahead of us and taken stronger action. In China, and maybe even in Italy, they were caught off guard, but the ones affected after them should have been better prepared. There was too much indecision in the beginning, so the virus spread more quickly. The governments that have applied the most radical measures most quickly are the ones that have been able to control it better. We should bear that in mind for future pandemics.

They say the worst is yet to come. What's in store for us?

The SARS-CoV-2 virus is new and we still don't know how it will behave. We can only predict the evolution of the pandemic based on what we are seeing now. At the moment, it's obvious that the number of infections will continue to increase in most countries. The curve for new cases probably won't peak for two or three months after the outbreak, but that obviously depends on how successful the measures are. The key is to make sure in these crucial months that the health services are not overwhelmed, because that's what leads to a rise in the number of deaths. What we really don't know is what will happen afterwards. There could be resurgences, possibly stronger than the first wave. Or it could be present all over the world, but have less impact because many would be immune. It could also mutate and become a strain we've no defences against in a few months' time, like the flu does every year. It's hard to say. We'll have to wait and see.

While they're working against the clock to find a vaccine, what steps should we be taking?

The only thing that works right now is reducing the number of infections. And you do that by minimizing social contact, locking down the cities or areas with the most cases, confining people to their homes… We have no alternative until we find a vaccine, and that's a few months off, if all goes well. That's why it's so important that we all follow the recommendations.

What advice would you give to the families shut up in their homes to avoid infection? And when they go out shopping?

First of all, be patient. We don't know how long we'll have to be like this, but it is very  important that we comply with the lockdown. When you have to go out, take every precaution. Remember that the virus is not transmitted by air, but it does live many hours on any surface. That's why we must watch what we touch and wash our hands very thoroughly. If you can, leave the clothes and shoes you use to go shopping in a cupboard by the front door, to avoid bringing the virus into the house. Above all take precautions and watch your hygiene, and only go out when it's absolutely necessary and for the shortest possible time.

Right now we can't get resources if there aren't any available. That's something that we'll have to think about and plan when the pandemic's over, so we're better prepared for the next one.

Every country creates and follows its own protocol against the coronavirus. Is this the right way to go about it or should protection measures be established for all states by organizations like WHO?

We should all act together. Pandemics are a global problem, and if we leave each country to its own devices, things could get worse, because decisions are often made based on political rather than scientific criteria, and that's highly dangerous. One central agency that could plan protocols with all countries, based on the advice of the best experts, would be the most rational way to face these crises. That would be hard to do, but we should learn from what's happening now and start thinking about it.

How long do you think it will take to get back to normal?

It's hard to say. It'll be months yet, if all goes well. But there are too many unknowns right now to make an accurate prediction.

Could global health, which analyses how the disruption and overexploitation of ecosystems could lead to health problems, have prevented this pandemic?

Prevented, probably not, but it could undoubtedly have helped to minimize its impact and control it sooner. It's very difficult to modify human behaviour, but due to climate change, we are already becoming aware that we have to act now if we want to avoid more serious problems in the future. Pandemics are a similar issue: we have to realize that it's a global problem that will get worse as long as we continue to degrade ecosystems and invade the habitats of wild animals. It's just another health problem resulting from human activity that we were simply unaware of before. We must learn from this and become more aware and incorporate it into global health studies, which will be increasingly important to prevent the collapse of our ecosystem.

What should the health authorities take away when the pandemic is over?

That we must be prepared. The last pandemic we faced, the 2009 swine flu, was a warning, because it had relatively few consequences, but we took no notice. We've wasted a decade that we could have used to set up a coordinated response system to cope with these types of crisis. Let's hope we learn this lesson this time and start to get ready for the next one.

Could there be a part two to this nightmare in the future?

That's not just a possibility: it's a certainty. There will be more pandemics, as there have always been in the past. We don't know whether they'll be more serious than  this one or less, but we must face the fact that it's inevitable, because of how microbes work and our current lifestyle. That's why I keep insisting, we must be prepared.