"At first Catalan piqued my interest; now it's my whole life" 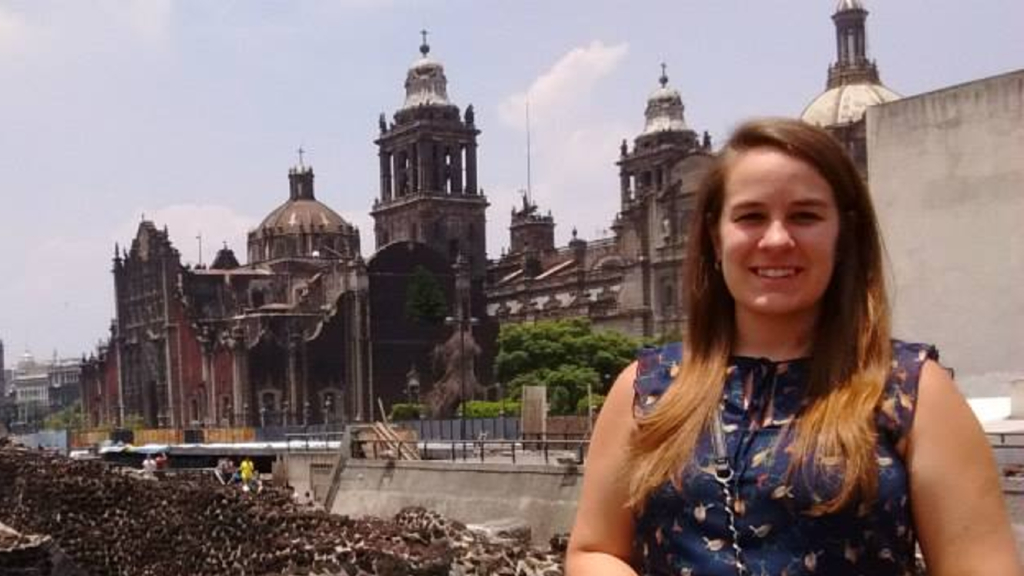 It was during Guardiola's time at the helm of FC Barcelona when US-born football fan and language lover Jill Fortin made first contact with Catalan. Indeed, despite lacking any previous knowledge of the language, she set out to read the club's website in Catalan and was quickly enthralled. Hearing her speak today, you would think she has spent years living in Catalonia, but in fact she has only visited Barcelona and Tarragona once each. A doctoral student at Indiana University Bloomington in the United States, Jill was awarded one of the grants sponsored by the UOC Faculty of Arts and Humanities (in collaboration with Institut Ramon Llull) and the North American Catalan Society to take courses from the UOC Bachelor's Degree in Catalan Language and Literature. "For me, this grant experience has been amazing beyond compare. I've discovered so much and so many Catalan authors. When the pandemic is under control, I'd love to visit Barcelona one day," she said. In Indiana, Jill teaches Catalan language and literature. Meanwhile, she continues to add new Catalan-language books to her repertoire and attends weekly get-togethers to practise the language with fellow learners at the university.

What first sparked your passion for Catalan language and literature?

Honestly, I don't have a clear-cut answer to that. I studied Spanish and French in high school and will admit that I much preferred French. One summer I had the chance to work as a family's au pair in the Canary Islands. It turned out that the mom was from Barcelona and spoke to the kids in Catalan. The dad, who was from Madrid, spoke to them in Spanish. I spent two months with them and was impressed by the language diversity, hearing Madrid and Canarian Spanish and Catalan every day. At some point I started to do some research on my own. At first Catalan piqued my interest; now it's my whole life.

Have you ever been to Catalonia?

Yes, but just to visit. I studied for a year in Madrid and would travel when I could from there to different places, including Catalonia. I've been to Tarragona and Barcelona. Oh, and the Balearic Islands, too. Now my heart's set on visiting Girona.

So just to reiterate, you speak Catalan the way you do just from taking classes in Indiana and because of your own personal interest in it?

I should point out that when I discovered that Catalan existed, I was also into football, and Barça at the time, circa 2010, had one of the finest teams in the world. So what did I do? I started to read the FC Barcelona website in Catalan. I realized that I could understand quite a bit, having studied both Spanish and French. That's when my passion for Catalan went from spark to flame.

We could say that Barça, or Guardiola rather, is partly to thank then?

[Laughs] I guess so, yeah, sure! But rather than giving them credit, I'd say that Guardiola's Barça fuelled my eagerness to start discovering Catalan.

Let's talk about the UOC Faculty of Arts and Humanities grant that allowed you to take courses from the Bachelor's Degree in Catalan Language and Literature. How did it all come about?

I'm currently writing my doctoral thesis, which focuses on the Spanish Republican exile, the return home after thirty years, and the literature that arose from that process, especially Catalan literature. My PhD is in Hispanic Literature, but I was already pursuing a minor in Catalan. I applied for the grant and was delighted to be chosen. Since I'm a member of the North American Catalan Society, I received an email with information about the grants and I applied. On another note, since I no longer take classes, I don't get to interact with Catalan language and literature as much anymore. So, this was also an opportunity to revisit the language and literature of Catalonia, but from a new viewpoint. I say that because until then we had only the Catalan professor here in Indiana to rely on. What I really wanted was to discover new novels, because here in the United States we always go on about the same books and the same authors, and it can be tricky finding new titles.

Can you give us an example?

Mercè Rodoreda is very well known and easy to find here. I did my final essay on a work by Marta Marín-Dòmine, though. It's highly relevant to the research I'm doing, but I never would have found it if not for this grant.

What other authors do you like to read in Catalan?

I have a soft spot for Jaume Cabré, especially his fascinating Les veus del Pamano; Sebastià Alzamora; Marta Rojals, whose novel Primavera, estiu, etcètera is wonderful, an absolute delight; Francesc Serés; and the Valencian Maria Folch, with her Després vénen els anys. It's a sensational novel, whose protagonist travels to L'Alguer. Now that is a very intriguing place, because it's like an island, a town that clutches onto Catalan and speaks a different language from everyone around it.

What about series or films in Catalan?

Sure, I've seen quite a few series and movies. I actually published a paper on Pa negre and Fènix 11·23. Thanks to it I was invited to speak about Pa negre in a couple of courses. Then there's Merlí on Netflix, which tons of people here like. I remember Plats bruts, too. I really enjoy and take interest in Catalan audiovisual productions, because that way I can listen to the language as well.

How do you practise your Catalan now?

When I meet with my professor, we speak in Catalan. Here, there are some students learning the language, but very few. We do have what we call the Cafè català, though, which is a weekly hour-long coffee break where we chat in Catalan. We used to do it in-person on campus between classes, but we've now moved it online because of the pandemic.

As a teacher, have you found that this grant experience has helped you to gain knowledge that you can apply in your classes?

Yes, I actually had the chance to teach one Catalan course. It was an elementary-level course intended to introduce the students to Catalan language, culture and history. And, indeed, I worked many interesting things from my PhD into it and I hope to teach it again.

Indiana University Bloomington is one of the few American universities dealing in Catalan, am I right?

You are. Since my interests lay in contemporary literature from the Iberian Peninsula, I sought out colleges with PhD programmes that offered Catalan classes. I was really shocked to learn that Indiana is home to a college that teaches seventy different languages! It's a wonderful place to pursue language studies and is actually the only college in the United States that offers a PhD minor in Catalan. The University of Chicago and the University of Colorado Boulder, for example, offer Catalan courses, but not a minor.

Last question for you. Would you be interested in working or collaborating with the university community here in Catalonia or Barcelona?

I mean, that would be a dream come true! I'd love to work in Barcelona for a few months.