"Lockdowns, face masks and health passports have existed for centuries" 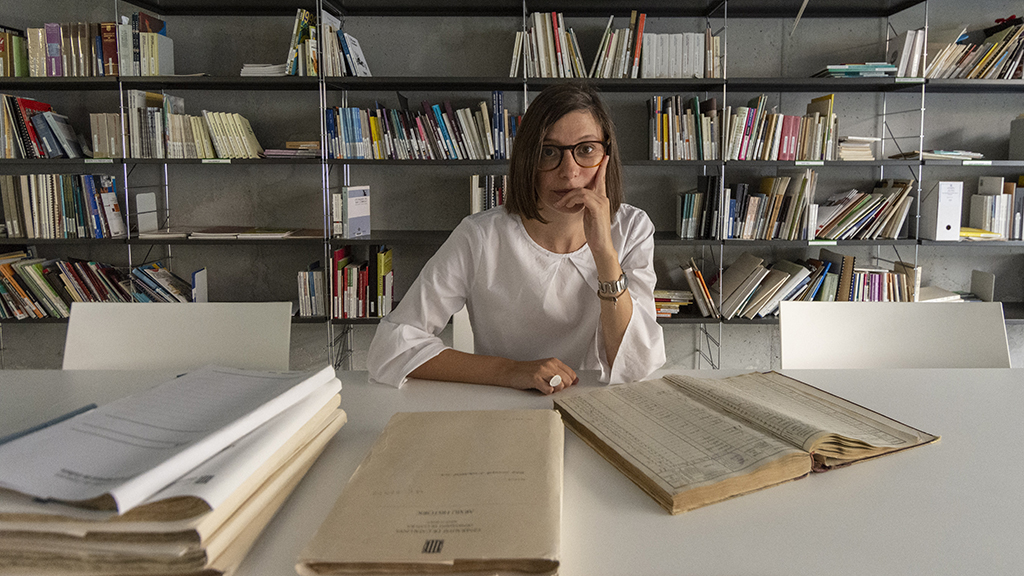 Joana Maria Pujadas is a champion of the social function of history, with a particular emphasis on the gender perspective. (Photo: Manu Mitru)

Joana Maria Pujadas is a champion of the social function of history, with a particular emphasis on the gender perspective. (Photo: Manu Mitru)

Much like Lònia Guiu, the intrepid pioneering detective springing from the imagination of Mallorcan writer Maria Antònia Oliver, Joana Maria Pujadas Mora (Palma, 1977) researches the past to learn more about our history and find the keys to our present. A researcher at the UOC's Faculty of Arts and Humanities, this historian specializing in demographics delves into manuscripts, census records, contracts and all manner of other documentation, to which she applies big data and artificial intelligence techniques for the automated building of databases.

Her lines of research range from the study of the creation of agricultural labour markets to the analysis of the gender pay gap four hundred years ago, as well as how socio-economic inequalities have changed in Barcelona and its hinterland before and after the industrial revolution.

Pujadas Mora is a champion of the social function of history, with a particular emphasis on the gender perspective. Luckily, she says, demographics exclude no one, as we all are born and die. One of the lines of research she is currently working hardest on is that examining pandemics. History, she notes, helps us understand what is currently going on with COVID-19. Lockdowns, face masks and even health passports have existed for centuries.

It's been a year since the outbreak of COVID-19, the latest in the series of pandemics that has afflicted humankind over the course of its history.

A historical perspective helps us gain a clear understanding of what is happening today. Non-pharmacological responses such as social distancing, the wearing of face masks and hand washing were also implemented at other points in history, as were lockdowns. Indeed, there has been a constant use of quarantines and cordons sanitaires since the 14th century. Whilst they might not have been total lockdowns, like those we experienced at the start of the COVID-19 pandemic, forcing us to stay at home, they could be municipal or district in scope, or include the closure of ports to stop maritime traffic, and quarantines were imposed.

Over the course of time, with an increased understanding of how pathogens are transmitted, face masks began to appear, as can be seen in the images documenting the 1918 influenza pandemic. Additionally, many activities, such as school lessons, were held outdoors, as began to be the case to combat tuberculosis, and personal hygiene recommendations, such as hand washing, were issued.

How were these restrictions received by the general public?

There were some who broke lockdown, obviously. There were also travel documents similar to the health or COVID-19 passports currently being discussed, and if you weren't coming from a disease-free place, you weren't allowed into another one. There might have been complaints from the public and there were demonstrations, but, at least in the epidemics we have studied, we've found no documented evidence of disturbances. This may have been because people could lead more normal daily lives than we have able to, continuing with their day-to-day activities, moving around, going to work and the like. But festivities were suspended, bars were closed, and church services reduced, depending upon the religious attitude of the community in question. By the 19th century, some were already aware that mass gatherings were dangerous, whilst others paraded images of saints through the streets, seeking their intercession to rid the community of the epidemic. However, what actually happened is that this led to outbreaks and more people were infected.

During this COVID-19 pandemic, the birthrate has dropped sharply in Spain, a country that was already ageing: we've seen the lowest rate of infant births since 1941. Did this also happen in other pandemics?

The birthrate always falls during times of crisis, because high rates need peace and stability, and epidemics are not regarded as a great time to have children. Unlike other pandemics in the past, and although we focus closely on the number of deaths due to COVID-19, the fact is that the figure is very low when compared with the Black Death or the 1918 influenza. The latter (often known as the "Spanish flu"), for example, particularly affected adult men of fertile age, whist COVID-19 mainly affects the elderly, and so the fall in the birthrate is due more to economic uncertainty.

Did people stop having children?

Generally speaking, history shows us that, at times of crisis, people decide to spread out having children, waiting for the situation to improve. Either that, or they decide to have fewer. Sometimes, there are also biological impediments, women who don't have children in a crisis and who aren't able to have them afterwards, because they are no longer of childbearing age, as might be the case in Spain today.

What happened in terms of inequalities in times of pandemic?

The plague helped to put an end to inequalities, as the disease killed across the board and in every age group, leading to a decline in the population. On the other hand, with the 1918 influenza epidemic, inequalities increased, and the disease behaved in a pattern similar to that of COVID-19. It's not that epidemics in themselves entail more or less inequality, but rather that they exacerbate the problems already existing in society. The fact is that, as a result of the pandemic, inequalities become more accentuated.

Were there mechanisms to try to compensate for these inequalities?

There was no welfare state or job retention schemes, but the governments of the past did try to ameliorate the impact. For example, during the cholera epidemic, there were plans for public works, which meant that those who had become unemployed with the closure of industries were put to work fixing roads. Other governments opted to distribute food amongst those who needed it.

As part of her research, she has carried out an in-depth study of socio-economic inequalities in Barcelona from 1481 to 1905. This has revealed that inequalities in Catalonia's capital were much greater in pre-industrial times.

The data enabling the study of five centuries of inequalities come from the Barcelona Historical Marriage Database, created as part of the ‘Five Centuries of Marriages’ project, funded by the European Research Council (ERC) and headed by Anna Cabré. Every marriage entered into in the Diocese of Barcelona had to pay a tax based on the couple's socio-economic standing, and this means that we can, today, have some idea of the wealth of the happy couple in question. Together with the then doctoral student Gabriel Brea, I decided that this database would be a useful tool for studying inequalities. We were able to break the data down socially and could see that, prior to industrialization, the upper classes, consisting of few but very rich individuals, were the social groups that made the greatest contribution to inequalities. On the other hand, after industrialization, it was the working class that created most inequality, because it had a very high demographic weight and a very low weight in terms of wealth.

Another flagship research project has focused on creating a sort of social network of the past.

We embarked upon a partnership between the Centre for Computer Vision (VCV) and the ‘Five Centuries of Marriages’ project, with the former's Director, Josep Lladós and Alícia Fornés, to push the boundaries of automatic document transcription. So, together with Alícia Fornés, we applied for the project 'Networks: Technology and citizen innovation for building historical social networks to understand the demographic past', as part of the Recercaixa programme. Using artificial intelligence techniques and providing volunteers with data training, we have been able recover historical census data from many towns in the Baix Llobregat district, and we've now begun work on the El Maresme district. A census is, in the end, a listing of inhabitants organized by household, and this gives us a family network which we can follow household by household, as well as a network of neighbours.

That's right. And, to train the algorithms to learn to read the censuses automatically, we have resorted to citizen science. We've created an app where volunteers can transcribe the information from the censuses. By doing this, they're telling the algorithm 'this has to do with Joan and that with Puig' so that, at some point in time, when it's learned enough, it will be able to read the manuscripts automatically. We've already got 400,000 individual observations. We've got algorithms already beginning to work that are integrated into video games that provide automatic transcriptions of parts of the census records and that players have to validate.

What is it that you think makes volunteers want to participate?

The fact that they will be able to trace the history of their ancestors. They'll be able to find out about the life of their great-great grandfather in Molins de Rei and what happened when he moved to El Masnou. To make searching easier, we've already implemented an onomastic (name) search engine. For us, the researchers, this Facebook of the past provides a lot of information, allowing us to work out the family type, the fertility rate and even study their social mobility, as the censuses can be used to follow people over the course of time: you can see what kinds of jobs they had and how they were affected by the macroeconomic context. For example, we have carried out a study based on census data that shows that, when industrialization took place, the first people to work in factories didn't do too well in terms of social mobility. However, in the second wave, when industrialization was more consolidated, they did very well for themselves. We can study this by looking at siblings.

And what role was played by women? Do they appear in these old documents or is their voice silenced there, too?

The great thing—and this is also one of the reasons I do this—is that demographics includes everyone, because we all live and we all die. So, we study both men and women, although it's true that women have not left such a mark in documents as men. For example, the census records include the men's jobs and, sometimes, their wages or income. However, in the case of women, the jobs are recorded with phrases such as 'intrinsic to their sex' or 'their duties'. Nevertheless, we can see how many children they had, how old they were when they married, and when they died.

In a way, the gender perspective is always implicit in my work. I'm currently doing work on the creation of the labour market in Mallorca. A colleague, Gabriel Jover, found the accounting records and notebooks of the pickers employed on the island's possessions (estates) specializing in olive oil from the 16th and 17th centuries. For the olive harvest, they took on day labourers, who were women and children. Well, we've been able to see what they earned every day and found that this agricultural work was more poorly paid and tended to be done as a family, such as a widowed mother and three daughters, or three sisters. This shows the sort of pay gap that existed back then for the same work, which was the case in those days and remains the case today.