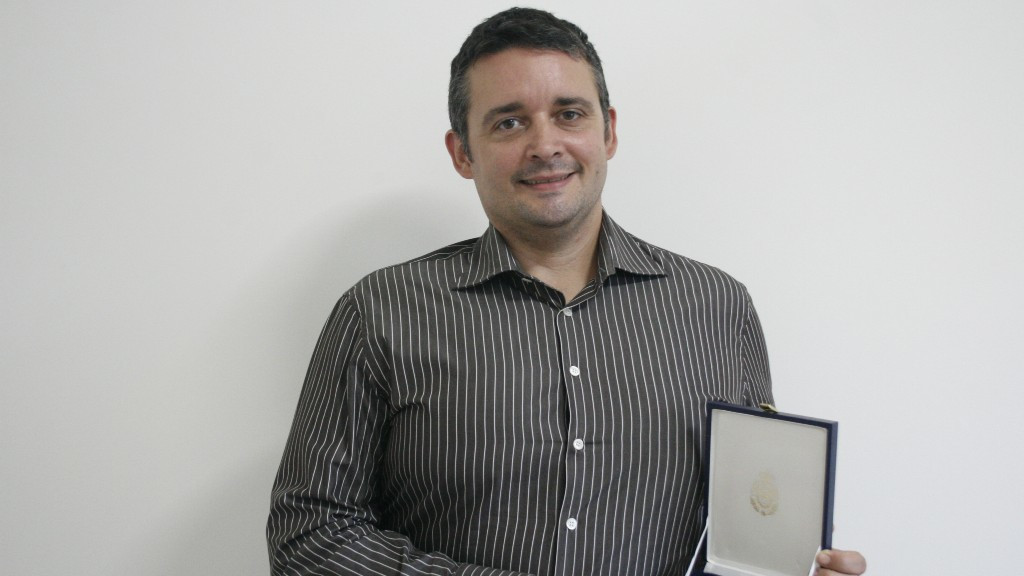 30/06/2022
Santiago Campillo
Sergio González Martín, a software architect at HP awarded by the Royal Academy of Engineering of Spain

Sergio González Martín was recently awarded an Agustín de Betancourt y Molina Prize medal for his contributions to three-dimensional data processing for 3D printers. An engineer by trade, he earned his doctoral degree from the UOC in 2015 on the Network and Information Technologies programme. His thesis was supervised by Angel A. Juan, professor of the Universitat Politècnica de València; and Daniel Riera, dean of the Faculty of Computer Science, Multimedia and Telecommunications.

You have been awarded an Agustín de Betancourt y Molina Prize medal for researchers by the Royal Academy of Engineering of Spain. What was your contribution?

I was awarded a medal in recognition of my contributions to the field of 3D data processing for 3D printers with over eighty patents filed. Around sixty of these have been published so far.

What does this award mean to you? How has it influenced your career?

The award recognizes all the work I've done in 3D printing and the research skills I learned when I did my doctoral degree at the UOC between 2010 and 2015.

What is its impact on society?

The innovations range from the preparation of printing jobs in a 3D printable space to their processing to generate the necessary voxel information to print them, as well as the various adjustments and offsets required to ensure that parts are printed to an acceptable quality standard. All these adaptations improve the 3D printing process and make it more predictable and repeatable. This way, the technology can be used in mass production and not only for prototyping.

As an expert in 3D printing, what value do you think it has for technological progress?

One of the big advantages of 3D printing is that we can use it to make virtually any part. Plus, the manufacturing process can be implemented much faster than, say, the process used to make injection moulds and it can be located just about anywhere in the world.

The pandemic has shown us that globalization and outsourcing production to South-East Asia can impact supply to Europe or the United States when the supply chain is unable to provide the necessary parts. There was initially a shortage of respirators, protective masks and sticks for producing swabs to collect nasal samples. At HP, we set up 3D printers for these applications at the company's R&D labs in Barcelona and the United States to print parts at the request of hospitals and institutions.

This success story shows that 3D printing technology can be used to set up a production line of specific parts in a short amount of time and that it can produce these parts closer to where they are needed geographically, thereby eliminating supply problems.

What challenges stand in the way of 3D printing reaching its full potential?

One of the main problems for 3D printing relates to the production of mechanisms to handle print jobs that can get very big. 3D printing can be used to make parts with geometries that were unfeasible to produce with other technologies. It also opens up the possibility of tailoring parts to the specific needs of each customer. In situations such as these, representing print jobs requires volumes of data that can increase exponentially, which poses a challenge for their coding and processing.

What UOC experience was key in getting you where you are now?

I did my doctoral degree partly online at the UOC, combining it with my full-time job. Most of my work experience has been in software R&D departments in different companies. However, in those early experiences, the research component of my work was less than what I would have liked, which is why I decided to do a doctoral degree. I was subsequently able to opt for the role of software engineer at HP, which has a much broader research basis. It has been during this new stage of my career that I have been able to make the contributions that led to my receiving this award and moving up in the company.

The UOC was useful in that it allowed me to learn about the scientific method, for instance, to search for and analyse information to come up with solutions or to define experiments for validating solutions. I have also gained a lot of experience with the family of algorithms that I worked on in my thesis, which has allowed me to apply them to problems with the preparation of printing jobs.

What was your thesis on?

The thesis dealt with the design, implementation and evaluation of algorithms based on the biased randomization of classical heuristics. The algorithms designed during my thesis can have applications in many fields, including logistics, telecommunications routing, the management of any distributed resource, and even the definition and management of 3D printing jobs.

What are the biggest hurdles in the field and its possible applications?

The limits of the area of computer optimization are unknown, so it is likely that there are problems for which the best solutions are not yet known. These problems are so complex that it is not possible to calculate their exact solution in a feasible length of time, and this is usually based on exploring in search of local minima. As it is not known, it may be that we can propose algorithms capable of discovering a better solution than the one found to date.