Menu
Listen
"Universities are bridge builders, even when governments are in conflict" 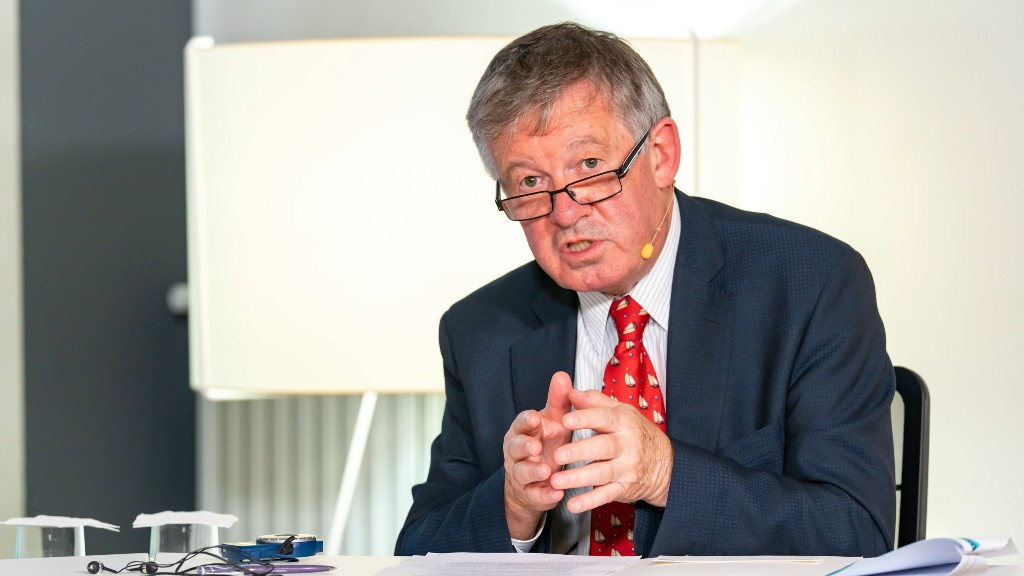 Michael Murphy, president of the European University Association (EUA), gave the inaugural lecture for this academic year at the UOC. In this interview, Professor Murphy, PhD in Medicine from University College Cork and a specialist in clinical pharmacology, covered many of the different points from his lecture, Universities Without Walls – Adapting to Change in Europe.

What have been the EUA's greatest achievements in the twenty years since it was founded?

The EUA is the organization that the European Commission engages with primarily as the umbrella body for the university sector. Firstly, one can see evidence of impact when one looks at the policies and strategies the Commission produces. And one can see that, generally, they are largely aligned with the university perspective. So, to that extent, we have achieved an influence on public policy, our primary role.

The second thing to say is that we have established our fora, our conferences and our working groups as effective places where universities across Europe share good practices that impact the quality of learning and teaching and the approaches to research. The third thing is that we represent Europe's universities on a global scale to other parts of the world.

Why is it so important to have a network of European universities in the EU, and what difficulties were there in building it?

That's a very good question. The first response would be that if Europe is to have influence in the world in the decades ahead, it has to be strong economically and as a society. And for that to happen, the universities of Europe have to work together, because universities are the drivers of a lot of innovation and a lot of societal change in what is now a knowledge economy or a knowledge society. And for us to be effective, we have to work across borders.

It's not easy because Europe is famous for its diversity. So, you have got diverse legal frameworks and funding frameworks for universities and diverse policies across Europe, and bringing them all together to be effective is challenging. But there's progress. It's happening.

"The universities of Europe have to work together because universities are the drivers of a lot of innovation and a lot of societal change in what is now a knowledge economy."

In what way? For example?

There's a new initiative in the past three years where the Commission has been driving the establishment of new European alliances of universities across borders. They are proving very effective in crystallizing the problems, the challenges, and they are creating a certain amount of pressure on the political system to remove unnecessary barriers. So that's progress, too.

Do you think that universities in Europe are open to receiving guidelines from the EU? Because some universities have a long history, centuries of history...

Yes, it is fair to say that historically universities have been seen as conservative institutions protecting their autonomy. But it's also fair to say that many of the policies and practices that the Commission are embracing are derived from practices that the universities themselves were already adopting. And they do listen to our views on shaping them. So, it's not coming as a big shock to the system. There is openness to change, to emerging ways.

What does this change mean for universities?

What will represent success for the European universities in the future will be the freedom with which students can move between campuses in different countries to get joint degrees or to gather microcredentials, which will then translate into their own degree. Another measure will be how easy it will be for staff to move between institutions, how easy it will be to manage pension differences between countries. Another measure will be the scale of cross-border research collaboration, where you will have virtual laboratories based on inputs from universities in different parts of Europe.

A lot of things are changing in Europe right now. We had the pandemic and now we have a war on our Eastern borders. What is the role of European universities in this new context?

The pandemic really accelerated change that was already underway, and it accelerated change that we needed to see happen if we are serious about the Sustainable Development Goals. And, in that space, the biggest challenge we now face is converting all our institutions into blended campuses. That means a balance between distance learning and on-campus learning. For that to happen, we have to see investment in technology and infrastructure and investment in training staff in the principles of distance learning. That's the pandemic. If we do this wisely, we'll cut our carbon footprint and we will drive many of the other goals.

The Ukrainian war is shocking and it has been both an opportunity and a challenge for universities because we have been doing a lot of work to support our colleagues in Ukraine. We had 26, now 32 member universities from Ukraine. In the EUA, we have set up a task force of experts to guide the reconstruction of the Ukrainian system when the war ends and to make the Ukrainian system more competitive into the future. So, as you know, every crisis brings its problems, but also its opportunities. And we're engaged with that and, of course, with supporting Ukrainian students and refugees all across Europe.

The new geopolitical context, with the war or China and Russia's push to become superpowers – does that represent a risk for European universities and European values?

The first thing to say is that this geopolitical realignment is taking place at a very bad time because, at the end of the day, we in the university sector are of the view that the Sustainable Development Goals are absolutely critical at this stage. And if you want to attain those goals, you need cooperation with everybody across the world. We need to harness the capacity of the whole university system and the collaboration of countries. So, this is happening at a very bad time for us in Europe.

I think the important thing is that we work together to make sure that Europe is strong and at the top table. Individual European countries are too small to have that impact. So, everything that grows collaboration, in research and innovation and in politics, will make sure that Europe has a say in the coming years. That is our responsibility.

But Russia and China are trying to influence EU universities?

Some major countries take the view that the approach should be to shut off connections, and universities have never been in that space philosophically. We are of the view that the university sector, education and research are bridge builders, even when governments are in conflict. That has been the case through history and it is the case going into the future. At the same time, we have to be clever and we work with people on the basis of reciprocity. We work on the basis of shared values in so far as we can, and also open sharing of the findings and research when we work together. So, we have to be smart.

It is regrettable that this has arisen in recent years, but it is a fact that we have to deal with. Principally, we stay as connected as possible. Even in the Russian war in Ukraine, we formally suspended our Russian university members because the rectors signed letters of support for the war. But we also take the position that our staff and our member universities are free to engage with Russian peers when they have confidence that the Russian academics share our values. And there are thousands of them that we know.

"We formally suspended our Russian university members because the rectors signed letters of support for the war."

Let's talk about mobility in Europe. We've talked about the pandemic, remote work and all these issues. How can all this affect the university sector? What are the risks? What are the opportunities from these changes?

We are much stronger collectively, and with mobility, students have more choices and improved opportunities for learning. Obstacles have to be removed. There are some risks, particularly the risk of brain drain from countries and regions that are not as economically strong or that don't have policy frameworks that are supportive of education and research. There's a risk that they will lose some of their smartest people. So, we have to make sure that in designing mobility programmes that we are conscious of that and that we put practices in place to combat brain drain.

How can we guarantee that universities in Europe develop equally in this new setting?

The first thing to say is that diversity is actually a strength of Europe and we must maintain that diversity. That's a Darwinian principle. The second thing to say is that there is a need for public policy change in countries with weaker systems. They've got to recognize that the policy framework on which they have operated will not deliver a competitive university system into the future. So, the regulatory framework, which is what governments control in the first instance, has to enable competition and being competitive and it has to free up institutions to give them the autonomy that they need to be competitive.

The second thing that governments must do is to provide funding. Without funding, strategies and plans are hallucinations. The universities themselves have to change. We say at the EUA that, to be successful, universities must have strong leadership and that leadership has to be trained professionally. We have to professionalize management and leadership within universities at all levels. The countries that are the strongest have been doing that for decades.

What might the UOC's role be in the European framework, taking into account its experience with e-learning?

Open universities have far more experience than campus-based universities of the new distance learning model. And with the experience that you have got, you have a lot to share with the traditional university sector in terms of the professionalization of e-learning. And because you at the UOC have got your databases going back 20 years and experience, you will be guiding the rest of us in matters of enhancing quality of e-learning and also, particularly, enhancing quality of assessment, which is a major issue for campus-based institutions. So, the UOC has a head start. Enjoy it!