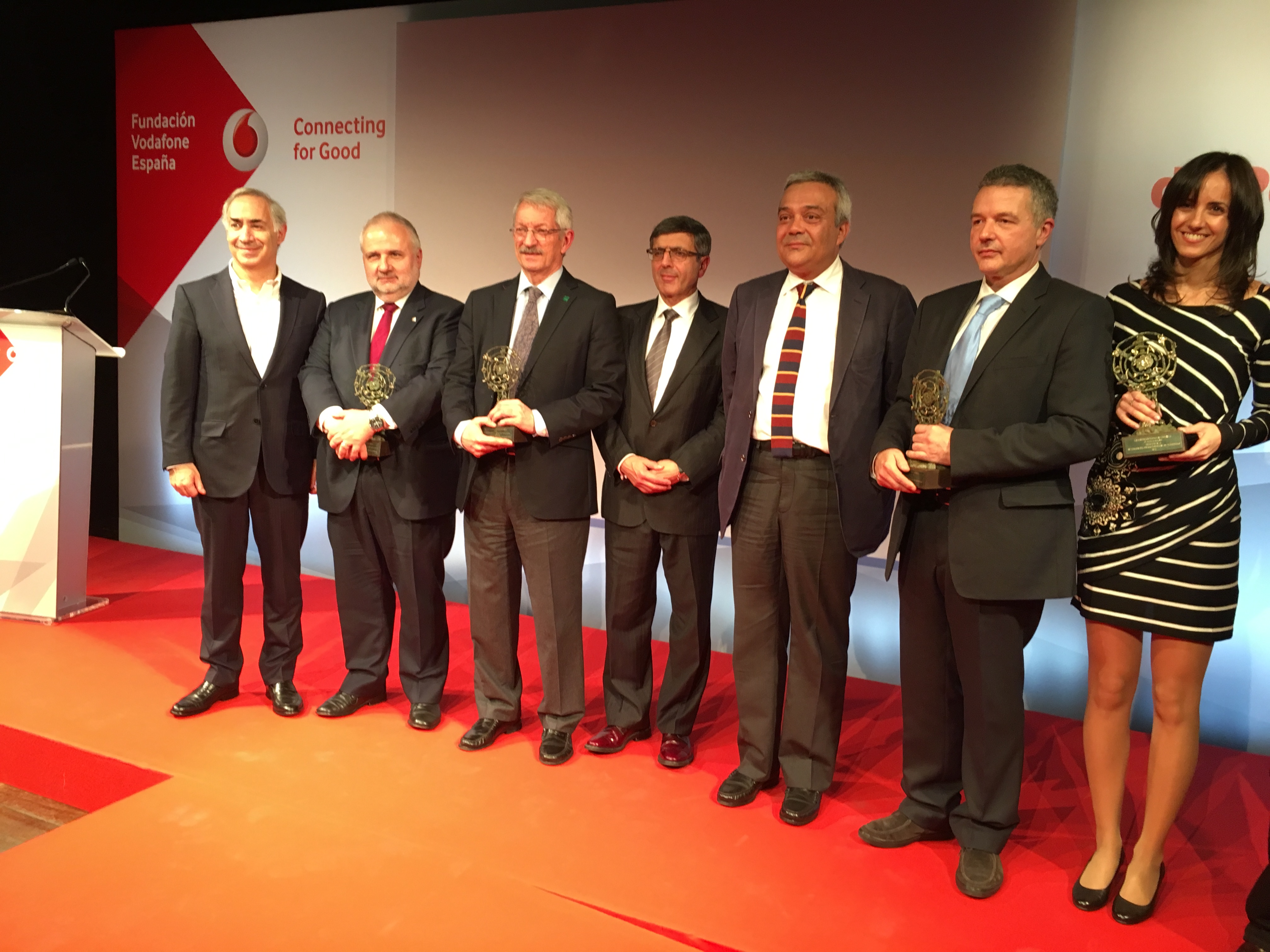 The president received the award this afternoon at the Teatro Real in Madrid.

The president received the award this afternoon at the Teatro Real in Madrid.

Today, the Vodafone Spain Foundation gave its Journalism awards to the journalists Rebeca Arroyo, José Manuel Nieves and Ignacio Del Castillo and the universities UOC and UNED. The jury, whose members are professionals from acknowledged communication media, have highlighted the UOC's two most significant areas of research and activity: the information and knowledge society and e-learning. This award, endowed with 20,000 euros, is given to the professionals and organizations that have stood out for disseminating work on aspects related with the new information and communication systems and their applications.

Josep A. Planell, the UOC's president, received the award this afternoon at the award-giving ceremony of the 15th Journalism Awards held at the Teatro Real in Madrid. The UOC has been given the Special Professional Trajectory Award. With this award, the jury acknowledges the work of the first Internet university, designed from the beginning with a 100% online quality education model. For the last 20 years, the UOC has been providing lifelong education to people, contributing to individual and societal progress, with an internationally renowned education model that is based on personalization and student mentoring using the new information and communication technologies. Today, it is Spain's leading online university in number of graduates (more than 58,000) and the second university in Catalonia with most students (more than 52,500).

The "Communication Professional Award" has been awarded to Rebeca Arroyo, who holds a degree in Journalism from the Complutense University of Madrid. Working at Europa Press since 2008, she is currently their editor specialized in the telecommunication industry and technology companies. Rebeca has been a professional journalist since 2005, having previously worked at Reuters and El Periódico Extremadura. With this award, the jury acknowledges her career, reporting excellence and dedication to the telecommunication industry.

As regards the "Online Award" category, created to acknowledge a professional or medium that has stood out for promoting communication through new alternative channels, the award has been awarded ex aequo to José Manuel Nieves and Ignacio Del Castillo.

José Manuel Nieves, founder in 1995 of ABC Informática, is a journalist specialised in science and new technologies and was responsible for creating, designing, starting and managing the first digital edition of the ABC newspaper. He has been a lecturer in Digital Journalism for the last 9 years and he is a leading communicator in science and technology for radio and television programmes and news services.

Ignacio del Castillo has been a journalist specialized in technology and economics for more than 22 years. He has worked for the business daily Expansión since 1988 and is one of Spain's most veteran journalists in reporting on the telecommunication industry. His work involves tracking the news from various points of view, and he is known for the depth of his market analysis and his knowledge of its corporate and regulatory relations.

In addition to the UOC, the jury has recognized the work of the UNED. Created in 1972, it is Spain's largest public university and also one of the largest in Europe, with 240,000 students enrolled. The prize acknowledges its constant effort to adapt to the times, which has enabled thousands of students to receive a university education, thanks to the integration of the new technologies in education, and the assistance provided to disabled and elderly students.

The jury's members are renowned professionals working in journalism:

A non-profit institution that contributes to promoting innovation and the use of ICTs to improve people's quality of life, particularly among vulnerable population groups. It develops technology innovation projects aimed particularly at making life easier for the disabled and the elderly. It supports ICT training programmes to foster personal empowerment and social and work insertion. It contributes to disseminating information on telecommunications in society through publications and reports.