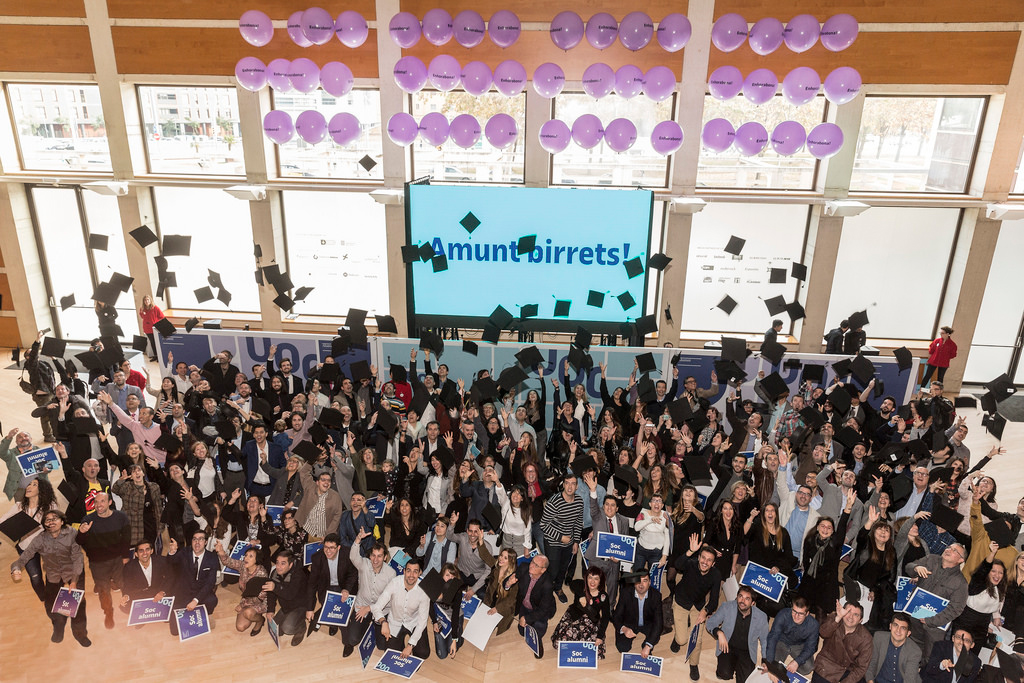 More than 150 women are graduating with an official degree from the Faculty of Computer Science, Multimedia and Telecommunications; although this is 300% more than a decade ago, they are still a minority

Ten years ago, in the 2007/2008 academic year, around 50 women graduated from the Universitat Oberta de Catalunya with one of the qualifications offered by the Faculty of Computer Science, Multimedia and Telecommunications. This year that number has risen to 158, a 308% increase. If we go back even further, the first female graduated in the 2000/2001 academic year. Since then, a total of 1,180 women have left the UOC with a degree in the fields of Computer Science, Multimedia and Telecommunications. Although the trend is definitely upwards, these 1,000-odd women only represent 13.46% of the total number of graduates in this field of knowledge over the University's history.

Within these technological courses, the degrees with most graduates are the Joint University Master's Degree in Information and Communication Technology Security (UOC, UAB, URV), with 152 people (of which 136 are males), followed by the Bachelor's Degree in Computer Engineering, with 145 students who graduated last year and this year (of which 133 are males). We asked the directors of some of these degree programmes about their experience of the student gender gap and how their academic and professional career has evolved from a gender perspective.

In the case of the Joint University Master's Degree in Bioinformatics and Biostatistics (UOC, UB), the programme's director Àgata Lapedriza, told us that the gender distribution is fairly balanced, without about 45% of female graduates. She attributed this to the predominant student admission profile, with students who come above all from the biomedical sector, where the proportion between men and women is more evenly distributed.

Àgata recalled how when she was studying for her Mathematics degree, half of the class were women. But things changed when she began studying for her doctoral degree in Computer Science; for a long while, she was the only female student in her research group. She is currently a visiting researcher at MIT and there have been times when she was the only woman in the group. However, her present group is led by a woman and there is a larger proportion of females. “Our field of work is emotional artificial intelligence, which has a lot of medical applications, and I guess this area attracts more women because of the research's social and human aspect”.

Another teacher who studied Mathematics and currently directs a technical master's degree at the UOC is M. Antònia Huertas, director of the Joint University Master's Degree in Computational and Mathematical Engineering (UOC, URV). Like Àgata, she recalled from her time as an undergraduate that half of the Mathematics students were women, but when she started her doctoral degree and later, when she started to work as an academic, the percentage of women plummeted. “I was often the only woman in the research teams and congresses”.

Huertas added that the fact that so few women study for the Joint University Master's Degree in Computational and Mathematical Engineering (UOC, URV) is due to “the negative influence of gender stereotypes in engineering degrees, as happens in all universities, and the fact that most of the technology professionals who pursue further education are men”.

Director of the Bachelor's Degree in Telecommunication Technologies, Eugènia Santamaría, remembered how, when she studied Telecommunications Engineering, less than 10% of the students were women. After graduating, she taught in a university department where the female presence was less than 5%. Santamaría was also the only woman in the engineering department of a company. In her case, the family environment played a decisive role in her decision to train in this field: “My father was a teacher and he spent his time looking for methods and tools to help children understand mathematical operations and problem-solving. I grew up in an environment in which mathematics were appreciated and weren't seen as a difficult, inaccessible subject”, she explained. Santamaría believes that this is a “key aspect in the development of technology-related career vocations”.

Teresa Sancho, director of the Bachelor's Degree in Applied Data Science, which will start in February 2019, still does not know how enrolment will go. However, according to data from other universities, it seems that there are more women interested in this area. Teresa also studied Mathematics, recalling that the percentage of male and female students was fairly balanced. “The shock came when I started to teach at the La Salle Engineering College, where I was the only female teacher and there were very few girls in the classrooms”.

What does the University do to attract women to technical degrees?

To achieve this goal, a number of actions have been carried out, such as creating the Inventa Group, whose members are teaching staff employed by this Faculty who also teach children aged 8 to 14 to programme in schools and children's hospitals, and the equit@T Award, which seeks to promote gender equity in ICT in Spain, Portugal and Ibero-America.

According to Prieto, “one of the biggest challenges we face is moving away from current academic sexism”. He also commented on the necessity to break down stereotypes, such as the notion that a computer specialist is “an unkempt person who never lifts his eyes from the screen, always has a soda on his desk and is obsessed with programming”.

All these actions performed at schools and universities are helping to gradually increase the number of women enrolled in faculties that teach technical degrees, but he also warned how "if we don't speed up the pace, we won't achieve gender parity until 2133".

On the other hand, one faculty that has more female students than males is the Faculty of Psychology and Education Sciences. This year, 2,177 women and 459 men are graduating. All of them completed one of the official bachelor’s and master's degrees in this field of knowledge between last year and this year. In this case, only 21.08% of the total number of students are male. Among the most popular degree courses, there is the University Master's Degree in Learning Difficulties and Language Disorders, with 1,042 students (of which 974 are women), followed by the University Master's Degree in Education and ICT (E-learning), with 936 students (of which 678 are women).

One of the students graduating this Saturday, 10 November, at L'Auditori in Barcelona, is Raquel Monge, holder of a University Master's Degree in Learning Difficulties and Language Disorders and winner of her year's special award. Trained as a teacher and working as an educational advisor, she is aware of the importance of paying attention to gender stereotypes, “as it is obvious that they still define women's and men's roles in all aspects of life”, she affirmed. She believes that both education professionals and families must be very sensitive in detecting both explicit and implicit messages related with these stereotypes and prevent them from influencing people's education and career choices. Raquel also believes that the educational community should support this change of outlook by providing guidance and training.

This year, 411 women and 90 men are graduating from the Faculty of Health Sciences; 183 women and 108 men from Information and Communication Sciences; 194 women and 142 men from Arts and Humanities; 551 women and 514 men from Law and Political Science; and 471 women and 486 men from Economics and Business. In total, 7,333 people have been invited to the graduation ceremonies that the University will organize on Saturday, 10 and 24 November, at L'Auditori in Barcelona, and on Wednesday, 12 December, at Ifema in Madrid.