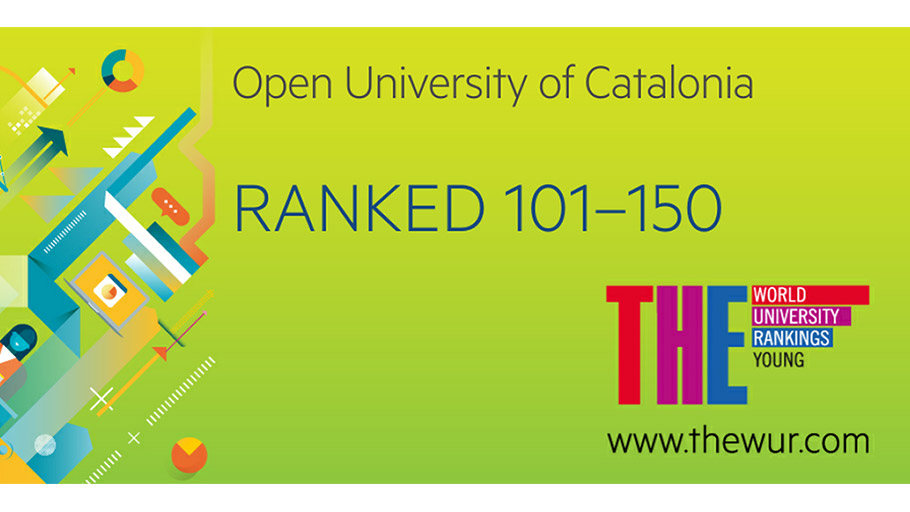 The Young University Rankings cover universities founded in the last 50 years and, for the first time, include the Universitat Oberta de Catalunya

The Young University Rankings are produced by the specialist British journal Times Higher Education (THE). A new list has just been published of the world's leading young universities, ie those founded in the last 50 years, and, for the first time, the UOC is among them. In this latest ranking, the Universitat Oberta de Catalunya debuts in the 101-150 bracket. A total of 351 universities were analysed, some one hundred more than in the 2018 ranking.

To assess the level of excellence in higher education, the ranking takes into account five areas of university activity: teaching, research, citations, international outlook and industry income. The UOC's scores in each of these areas were: 16.9 for teaching, 18.6 for research, 71.3 for citations, 39.8 for international outlook, and 34.9 for industry income.

The indicators used are the same 13 used for the flagship THE World University Rankings, but the weightings are adjusted and an institution's reputation plays less of a part. The list of young universities is led for a second year running by The Hong Kong University of Science and Technology. École Polytechnique Fédérale de Lausanne, Nanyang Technological University, Singapore, and Paris Sciences et Lettres – PSL Research University Paris came second, third and fourth, respectively.

The THE rankings are considered among the most prestigious and transparent classifications in the field of higher education, rivalled only by the Shanghai Academic Ranking of World Universities and the QS World University Rankings. Just 9 months ago, the UOC broke into the Times Higher Education 2018 general rankings as the only online university included from Spain. In terms of young universities, the UOC came 12th out of the 38 Spanish universities. In the global rankings, the UOC was placed in the 601-800 bracket from a total of 1,258 universities from around the world.

The UOC breaks into the Times Higher Education World University Rankings, and is the only online university included from Spain

The Times Higher Education ranking highlights the UOC?s engagement with its students