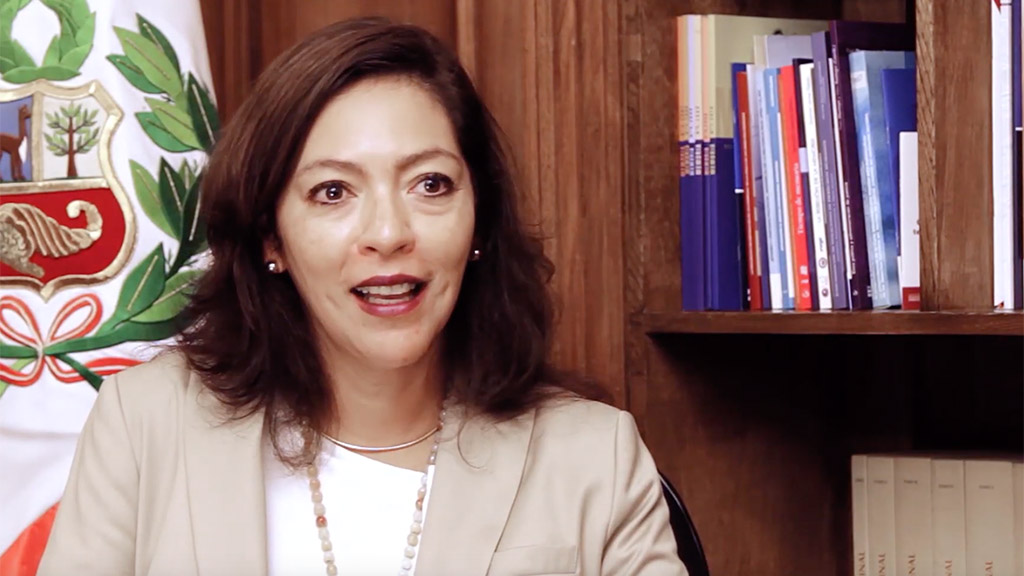 Lawyer Elizabeth Salmón holds a PhD in Public Law and chairs the United Nations Human Rights Council Advisory Committee. She is also the director of the Democracy and Human Rights Institute of the Pontifical Catholic University of Peru (IDEHPUCP), is amicus curiae for the Special Jurisdiction for Peace (JEP) in Colombia and has been a course instructor on the UOC's master's degree programme on Human Rights, Democracy and Globalization since 2010. We caught up with her to find out more about her work on gender equality, the humanitarian situation in Latin America with respect to Venezuela, her role with the JEP and the Advisory Committee and her experience as a course instructor at the UOC.

The UOC's University Master's Degree in Human Rights, Democracy and Globalization has seen a sharp rise in popularity among Latin American students, demonstrating a generalized interest in human rights issues that Salmón put down to the region's historical political experiences, making the transition from dictatorships and armed conflicts to regimes committed to absolute democratization. She also highlighted the growth of the middle class within the countries that make up the region.

Increased access and greater dissemination in terms of rights, as well as the strengthening of the Inter-American System for the protection of human rights in Latin America are the factors that the legal expert flagged up as being responsible for the improvements and reforms implemented to that end across the region. The subsequent desire within these countries to seek out more information with regard to human rights is, in part, due to the need to turn them into better realities.

Talking about the current political and humanitarian situation in Venezuela, in Salmón's opinion, it demonstrates the immediate impact the deterioration of a democratic system has on the exercise of rights and emphasizes the fact that Venezuela is in the midst of a crisis; a situation which is directly affecting the neighbouring territories and represents a major challenge for the region as a whole.

"In terms of gender equality, there is still much to be done in the region", said Salmón, with regard not only to parity in political or business representation, but also to violence against women, breaking taboos, providing equal opportunities and applying an approach that is truly gender oriented. She went on to emphatically stress that a complete revolution is required with regard to gender equality, in terms of efforts and investment being made by governments, concluding that, "it's not just a question of economics, of numbers, but also a true democratization, a feminization of the democratization of our countries".

The United Nations Human Rights Council Advisory Committee is a body created to provide legal support and advice on human rights issues. Elizabeth Salmón is a member of the committee, which is made up of 18 experts, and was elected as its chairperson in 2018, thus becoming the first Latin American woman to hold the position since the organization was founded.

One of her principle areas of activity during her time with the Committee has been the implementation of a study on gender parity in the bodies concerned with human rights issues within the UN itself. The results identified an average rate of female participation of just 30%, with even greater disparity found in some cases. They also indicated a higher propensity for women to be involved in those areas that deal with the rights of women and children, thus flagging up the stigmatization of women.

The Advisory Committee is involved in working towards SDG 5 of the UN's 2030 Agenda Sustainable Development Goals, concerned with the promotion of gender equality. The expert stressed that although the United Nations is working very hard to implement the targets established, those efforts alone are not sufficient and must be backed up by actions implemented by the individual member states, further highlighting the importance civic engagement as another crucial element.

The democratization of education through online delivery

Elizabeth Salmón has been working with the UOC as a course instructor since 2010. She has been responsible for a number of courses, from those studying the Latin American human rights system to those relating to her own personal area of interest, international humanitarian law.

Outlining the benefits of the online delivery of education, the legal expert said it gives her the chance to meet people from a diverse range of backgrounds interested in human rights higher education and those intent on applying the theory within their own realities. Salmón therefore emphasized the fact that online education facilitates a richer learning experience as a result of the different perspectives and contexts brought together in a single classroom.

She also stressed that, in her experience, online education often provides access to a more attractive range of course options, with top-class teachers, and delivering cost and time savings for the student. She added that, "online education is incredibly democratizing in that it is available wherever it is required and can be accessed by those individuals who really need it, as well as providing the chance to attain a high level of education".

In Salmón's mind, online education is a bridge that allows us to cross borders and has the significant advantage of being able to extend across a diverse range of economic, cultural, political and legal profiles but which, as a consequence, needs to ensure the effective adaptation of various aspects.

The Colombian Special Jurisdiction for Peace (JEP) is the judicial mechanism that forms part of the Comprehensive Truth, Justice, Reparation and Non-Repetition System generated as part of the Peace Agreement between the Colombian Government and the FARC-EP guerrilla group.

Salmón is one of the 10 international legal experts serving on this Special Jurisdiction, six of which are appointed to the judicial chambers and four, as is the case of Salmón, to the main Peace Tribunal.

To date, Salmón has not been called on to make a judgement, since, as she explains, the JEP is currently in an embryonic phase, is not fully developed from a legal standpoint and is the source of intense public debate in Colombia. Therefore, the JEP is in a process of establishment and strengthening, and, as such, the international jurists' role is not currently being exploited to the full.