"By offering online education, we can cultivate talent anywhere in the world" 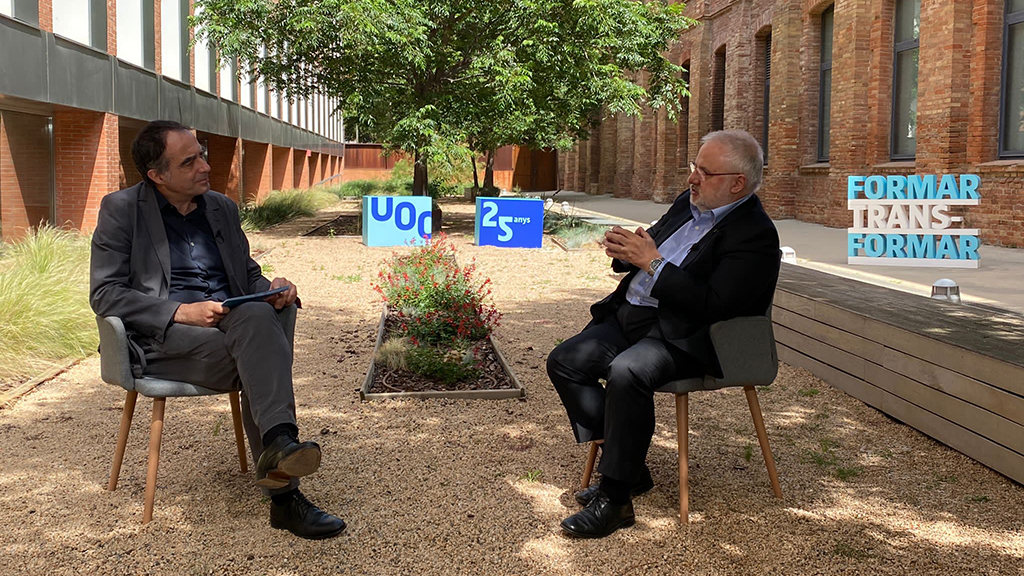 Josep A. Planell: "In such a rapidly changing world, lifelong learning is essential" (photo: UOC)

Josep A. Planell: "In such a rapidly changing world, lifelong learning is essential" (photo: UOC)

Josep A. Planell has been the president of the Universitat Oberta de Catalunya (UOC) since 2013. His own academic journey saw him graduate in Physics from the University of Barcelona and later earn his PhD in Materials Science from Queen Mary University of London. In our conversation, he spoke about the challenges the UOC faces. The pandemic has brought elearning into the spotlight and may have set in motion a shift in higher education, which has been trending towards internationalization in recent years anyway. Mindful of these changes, Planell, whose scientific career has made him the most cited researcher in academic publications in his specialization in Spain, stressed the importance of strengthening the connection and symbiosis between science, technology and creativity – a hallmark feature of the UOC.

The pandemic caught everyone off guard and had universities going to great lengths to move online in response. Now there's a chance that hybrid or even fully online programmes become the new norm. Does this mean more competition for online universities such as the UOC?

The health emergency forced everyone to adapt to the online environment as best they could. Universities put in a great deal of effort, and we should be grateful for that, but most are not designed or prepared to make the leap to across-the-board online education, yet. Some traditional universities may take COVID-19 as an opportunity to transform and offer more elearning options down the line, and this paradigm shift could affect the UOC to some extent. However, we should also consider the fact that most universities target a type of student that we do not. We offer lifelong learning, rather than focusing solely on 18-to-23-year-olds.

What's more, the way the UOC has evolved over the past 25 years, both technologically and in terms of its educational model, governance, e-learning quality standards and, most of all, its research and knowledge generation – especially in fields where technology and the social sciences interact – has made it a leader in elearning and an example to follow.

The pandemic has fast-tracked changes to how we live and work, and digital nomad seems to be the latest buzzword. These new dynamics could have a positive influence on regions that are far-removed from bigger cities and have dwindling populations. What can the UOC do to help these regions develop?

We have a great opportunity here because the UOC allows people anywhere to pursue an education. There are many families that cannot afford to send their children to university in a city. That's why it's so crucial for online universities like the UOC to help people study wherever they live. Being able to get a degree without having to leave their hometown means these areas can benefit from their new knowledge and professional endeavours. This requires investment in technology and infrastructure. Governments need to ensure high-speed internet access for everyone, everywhere, and promote this new kind of rural living.

With the internet everywhere, universities can be global institutions. That doesn't just mean having an international agenda, but also training students to be global citizens, with an approach that is inclusive and respectful of diversity, and that seeks determinedly to make a social impact. This is actually one of the strategic pillars underpinning the UOC's core. It means using the right teaching materials to promote global learning and interculturality in the classroom, as well as striving to ensure that the digital, organizational and teamworking skills that students acquire help them to become global citizens, equipped to take on the challenges of the 21st century.

You have said more than once that although fake news and theories such as the flat earth are on the rise in today's society, the pandemic has put science back where it belongs.

This is true. Our greatest weapon against the health crisis was science. It gave us the vaccines, and the situation is getting better. But it's not enough because the pandemic is more than just a health emergency; it's affected every facet of our lives. Just look at the mental health issues stemming from COVID-19. Some go so far as to compare the current situation with war, at least in terms of the public tensions it's causing. It has marked a turning point, and science is one of the tools that we need to use to find out what's really going on now. With fake news spreading at an all-time high, science has a duty to set well-reasoned criteria, and it's up to us as a university to help make this possible.

UOC research focuses on the interaction between technology and the social sciences. With the recent presentation of art, science and technology hub Hac Te alongside eight other institutions, the UOC is opening up new avenues for research. What is the vision behind this initiative?

When we launched the Internet Interdisciplinary Institute (IN3) in 2000 to explore the interaction between technology and society, we planted an idea that has continued to bear fruit ever since. The first and most obvious was the eLearn Center, which focuses on the link between technology and education. Then we turned to the link between technology and health with the eHealth Center. Now there's a third branch exploring the relationship between technology and creativity. That's why we're behind this hub, which brings together art, science and technology. We believe it'll be a transformative project for the UOC and a catalyst of change for the city of Barcelona and the country. This forward thinking involves a clear commitment by the University to invest in technology, for which we will earmark 10% of our budget. In 2013 that was €8 million; by 2022 it'll be 15 million.

The UOC is about to become an institutionally accredited university. What will that mean for it exactly?

It's a tremendously important milestone. We'll have a quality seal that certifies the important role we play in cultivating quality university-level education. It's also essential for establishing relations with countries in Latin America. The globalization policy we're pursuing has us collaborating with academic institutions as well as government agencies, and this seal is vital when working with the latter.

A privately run public service. Is that how the UOC would put its governance simply?

We're always asked whether we're public or private. The law creating the UOC recognizes it as a private university, because it's run by a private foundation. However, the preamble of the text acknowledges that it was created by the Government of Catalonia to ensure the availability of publicly accessible distance university education in Catalan. In fact, this law states that the UOC's enrolment fees will be determined by the yearly updated pricing decree from the Government. In order to meet these prices, the UOC receives subsidies. Being a public service and a private foundation requires a balance that is tough to strike in a country as divided as ours. That being said, systems of public governance run by foundations – whether public or private – exist and are widespread in countries such as Austria, the Netherlands and Portugal. This is nothing new.

This academic year sees the start of the new Bachelor's Degree in Primary Education. What will it mean for the UOC to train primary school teachers?

This is another important milestone that we have worked hard to reach. The desire to teach Primary Education at the UOC was present long before I took office as president. There came a point when the number of students enrolling at online universities outside Catalonia to study Primary Education was growing so much that it finally became clear to the Catalan Department of Education that the UOC had to offer this bachelor's degree.

For me, finally being able to offer Primary Education at the UOC goes much further than the degree itself. By taking a novel approach to teacher training, with a focus on building strong digital competencies, we can help to remove the huge gender bias in science, technology, engineering and mathematics (STEM) higher education programmes. If we have tech-savvy female teachers in the classroom, we'll see more young women down the line choosing technology-related degrees.

We've grown over the years because we had a mandate from the Government of Catalonia to grow and make ourselves viable despite our crisis-ridden backdrop. The teaching we do is scalable, yes, but there is a limit. This limit became an issue this year, as we had to close some classrooms because we didn't have enough teaching staff. We'll have to sit down with the Government to figure out what this limit is. It'll be a big debate because an open UOC should mean no numerus clausus, no limits on numbers. Will we have to enforce cut-off marks for admission? That, too, would mean we're not completely open.

The UOC's mission, as I was saying before, is to ensure publicly accessible distance education. This raises a series of very interesting questions that will lead to a debate about whether we can grow further. In some areas we certainly can. We need to find those programmes and fields that make us stand out, thanks to the quality of our teaching and our uniqueness with respect to other universities.

Talking about the UOC's uniqueness, what would you say it boils down to?

Firstly, our educational model. At the UOC, our students learn by doing and assessment is competency-based. We've been careful not to bring the dynamics of face-to-face classes into our online classrooms, which would otherwise mean professors giving lectures through the computer screen. Another unique feature is our governance: we have a public mandate but are privately run, and this is supported by well-coordinated academic management. The research we do and the fields in which we do it also make us stand out. I would also highlight the University's drive to be a hub of knowledge. Our mission is to disseminate knowledge and create value. Knowledge has been spreading beyond the classroom for some time now. It's in hospitals, museums, companies… everywhere. So, our job is to activate and boost this knowledge, and put it into the hands of the public.

The UOC has been working to strengthen its global reach for some years now. It has centres in Mexico and Colombia, it has brought in staff members from many different countries and it has been pursuing its own internationalization policy. What do you think lies ahead in this respect?

This internationalization was hotly debated here at the UOC. But I think that our model is working nicely, because we understand that the path towards globalization and the way into other countries is through their local governments. This is especially true since we're dealing with a sector as regulated as higher education. Our success is borne out by the growing number of international students in our classrooms, which currently stands at 12,500. A third of these are people of non-Spanish nationality studying at the UOC from countries other than Spain, most in Latin America. Another third are people from other countries, mainly Latin Americans, who live in Spain. And the last third are Spanish nationals who live and study outside of Spain. Our vocation as a public service and our online model allow us to nurture people's talent according to their own needs, wherever they are.

I'm certain that the UOC's mission, which is to provide people with lifelong learning, will be in full force in the future. 21st-century universities, and ours in particular, will have to ensure that they offer education that suits people at any point in their life or career, harnessing the latest technologies as we have always done. And to ensure its social impact, this education must be offered at public prices.