UOC community joins the maker movement to fight the coronavirus 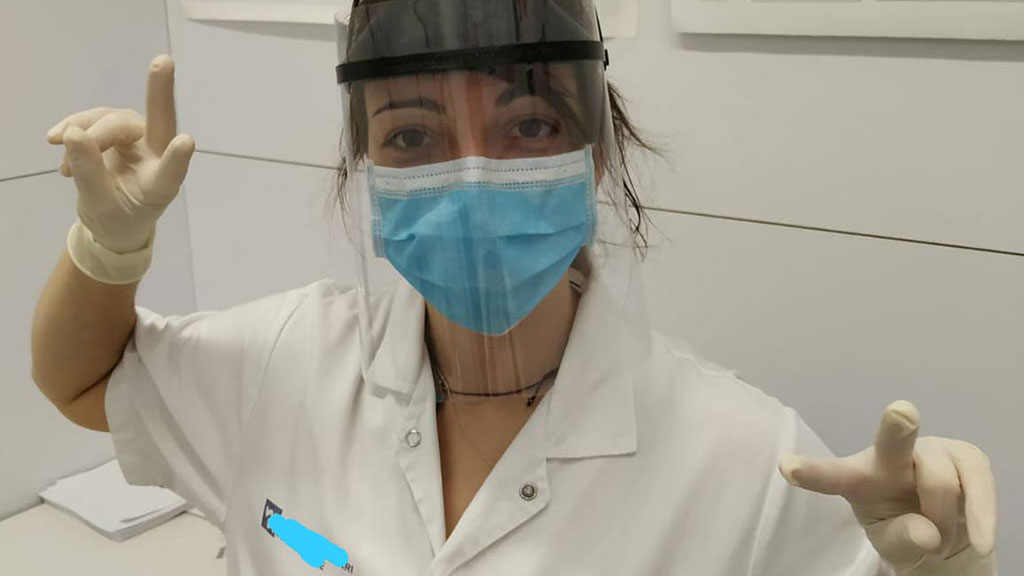 More than 15,000 altruistic makers from all over Spain have been working to create the protective health gear being used at different hospitals. Relying on 3D printers and other related technology and using social media to coordinate their actions, these volunteers are lending a hand to combat the coronavirus crisis by supplying the visors, glasses and masks that hospitals so desperately need. Although they have been working together under the "maker" title for over a decade, they are just now stepping into the spotlight. The UOC community is no stranger to the movement and is pitching in from homes, companies and laboratories to help in the fight against the COVID-19 pandemic. Would you like to meet a few of these UOC makers?

Luis Villarejo, CEO of the UOC spin-off Immersium Studio and member of the Cervelló-based (El Barcelonés) Cervemakers community, is the type of person who comes to mind when we think of "makers". He's not shy around technology; in fact, he has made a career of it. But he said that he embodies only one of the many maker profiles: "You'll find a bit of everything with this group: computer science and industrial design professionals, retirees who worked in a related field, and even young people interested in the movement." And what do they do exactly? Makers use technology to design and manufacture objects using 3D printers or laser cutters, among other techniques, and believe in sharing knowledge in open access.

Right now the around 20 makers who live in Cervelló are focusing their efforts on providing four healthcare centres in the Barcelona province with visors. The organization that brought the municipality's residents together, Cervemakers, was founded less than two years ago but it only took a matter of days to get the home 3D printers up and running. One of these machines is Villarejo's, built by his 11-year-old son Victor in a workshop given by the maker group. Villarejo proudly described how his son, "all on his own", is printing visors that will help protect healthcare personnel. "It allows him to be aware of the situation and feel part of the solidarity movement," said Villarejo, "which lets him see that he can use his knowledge, from home and in coordination with other makers, to help in a global emergency." Villarejo also said that he is proud of the makers for coming together to show how the combination of "available technology and the willingness of people with no inherent professional responsibility" can help to curb the health crisis. So far, Cervemakers' members have created over 200 visors in one week, which is pretty impressive considering, as Villarejo pointed out, "each printer takes hours to print one visor". Once the visors are ready it is the Protección Civil police force, acting on behalf of the City Council, who handles transferring the material to the hospital. To date, some 140 visors have been delivered to hospitals in Mataró, Bellvitge and Molins, as well as to geriatric facilities and pharmacies.

When he is not "making", Villarejo is busy directing his company, Immersium Studio, which creates augmented and virtual reality experiences for culture, education, tourism and health. Before that he worked at the UOC developing educational technologies, which is how he came into contact with Hubbik, the University's entrepreneurship platform, which helped him get his idea of using immersive technology to impart knowledge off the ground. One of his most recent projects was in Castelldefels (Barcelona), where his company designed an exhibition that brought an archaeological site to life.

The lesson behind the whole maker movement, which its members hope will get the recognition it deserves in the near future, is one of solidarity. As Villarejo said: "The value of solidarity and sharing knowledge is the movement's defining feature. When there is an emergency or a social issue, anyone who can collaborate, does. Not a minute goes by and people are involved."

Algorithms to supply hospitals with materials

In a state of alarm marked by limited movement, distributing all the material being produced throughout the territory poses quite a challenge. Distribution is handled by various government agencies and companies, but there are experts studying how to make things run as smoothly as possible. A group of volunteers from the Barcelona metropolitan area approached the Internet Computing & Systems Optimization (ICSO) group at the UOC's Internet Interdisciplinary Institute (IN3) with just such a request. Eager to lend a hand, the research group teamed up with the Fhios company to develop smart algorithms to optimize pick-up and delivery logistics between homes and hospitals. The researchers, with Ángel A. Juan, ISCO's lead researcher, at the helm, are working with technology that allows them to compute the most efficient delivery route to follow. With just seconds of computing, the group said that they can offer quality solutions to make the difficult task of collecting hundreds or thousands of supplies from homes all over the El Barcelonés region less complicated.

When the state of alarm went into effect weeks ago there was no doubt in the makers' minds that they had to put the knowledge and technology in their workshops and homes to good use and help society. And how to go about this? What was lacking? Healthcare supplies. Thousands of people put their heads together to find innovative but feasible solutions to the lack of visors and ventilators in hospitals throughout Spain. Now the number of volunteers is over 15,000 strong and growing, with people working together through social media and websites like www.coronavirusmakers.org and http://3dcovid19.tech/. People from all over Spain are joining in, wanting to do their part and organizing themselves into groups, the largest of which is the one dedicated to manufacturing. For the most part they are people with 3D printers working tirelessly, but there are others working on designs, production and what materials to use, as well as professionally certifying the objects for use.

"This initiative took off years ago because there were people who felt the drive to do everything at home and created groups so they could mutually support each other," said Sergio Morales, course instructor for the UOC-ESUPT's Master's Degree in Industry 4.0 and coordinator of Industry 4.0 initiatives at Fluidra. So that this drive is not slowed by inefficiency, coordination and information are key. "Take note: anyone can have a 3D printer, but for an object to be useful or function correctly certain criteria have to be met," the UOC course instructor highlighted.

"We have to be careful," said Morales, who works on behalf of Fluidra with the 3DCovidTech movement operating between Parc Taulí's 3D Laboratory and Sabadell University Hospital. The templates the group will use to print objects in companies like Seat or HP or homes are certified by the Barcelona Physicians' Association. "The doctors check the templates, both their design and material, to make sure they are functional in terms of disinfection or sterilization," Morales said, adding that there are controls in place for everything being manufactured as well as their transport to the health centres.

"We are primarily producing fungible goods and as many as possible, until the need is met," Morales said. When the crisis is behind us, society will no doubt recognize the efforts of these creators, but experts say that this may be accompanied by a "paradigm shift". Morales pointed out that, up until now, "3D printing has been used for prototypes, to certify and improve templates, before mass producing them", but the current situation has shown us what this knowledge network is really capable of, and it commands respect. As the UOC course instructor said, "We're seeing how versatile this manufacturing approach is. It took a situation like the present one to bring us to say it was this or nothing. This will raise its status as a production method."

Generosity, in the makers' DNA

For Susanna Tesconi, professor at the UOC Faculty of Computer Science, Multimedia and Telecommunication, makers are all about generosity: "The whole do-it-yourself concept is very individualistic, but this movement's logic is based on 'doing it with others' and is a meeting space for horizontal learning. This spirit of collaboration, even when it's done online, is in the maker movement's DNA." Tesconi added that another one of the phenomenon's signature characteristics is "being in touch at the local level", which is why the groups "identify needs" in the local environment and try to solve them, especially at a time when "it's difficult for us to move around", like in Bilbao, where they are providing protective equipment for ambulance teams, or the medical supplies being produced in Castelldefels. Tesconi feels that the movement's contribution to the health crisis will raise its "visibility", but she stressed that as a teacher who herself designs educational programmes of this nature, numerous experiences have been operational at both the primary and secondary school and university level for some time now. She foresees that "we will better understand and see that behind these machines getting all this attention are people. The people generating and sharing their knowledge are the ones who are making all this possible".

With a mix of pride and concern about the situation, UOC graduate César Garcia produced a YouTube video explaining what it has been like recently for this collective: "Right now the makers are an unstoppable force". For him the idea is to "work to build open knowledge, with open licences, so that anyone can join these groups and contribute whatever they can". Garcia, who with his podcast, "La Hora Maker", has been promoting the movement for years, wasted no time in motivating people to action. The very first weekend of the lockdown he created a group on Telegram to discuss what they could do to help the health sector. Since then he has been completely overwhelmed by people contacting him to work towards one single goal: fighting the spread of COVID-19.

"The first day there were 20 people, the next, 100, and by the third there were 1,000," said García, who described the current maker movement in Spain like so: "We have built a very large community of makers who are eager to collaborate, to do something useful". Although he considers himself just another maker and in no way a spokesman or representative because he is in a community of peers, he did want to highlight that it is all completely non-profit and all the work carried out is voluntary. Thousands of people, asking nothing in return, have rolled up their sleeves and thrown all their creativity into creating visors, helmets, glasses and even ventilators, which are still in the testing phase in Asturias. "Now what's important is that we help relieve the lack of supplies and materials for personnel coming into contact with those who are sick. No one should be working with patients without protection," he said. People are so eager to help that now it's not just designers and manufacturers who are involved; projects to develop software, mutual aid apps or chatbots are also under way, although how they will be used exactly remains to be seen. "We are all busy creating; time will tell how it all comes together," a beaming García said from his home office.

However, it's not all good news. In Madrid the maker movement recently encountered a setback when the Community of Madrid's Ministry of Health rescinded its approval of a template for plastic masks, halting production and denying their authorization.