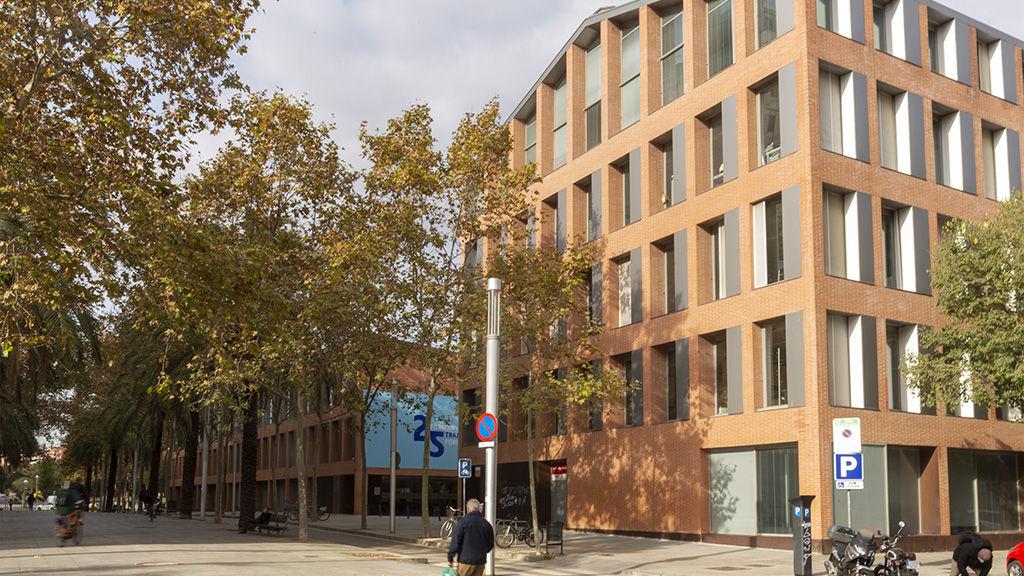 The UOC's new research hub will connect researchers and centres working in the fields of e-learning, e-health and the network society with world-class facilities, such as its Data Science Lab and Media Lab

Marta Aymerich, UOC Vice President for Strategic Planning and Research: "The hub will enable us to increase the societal impact of our research, and we hope to respond to complex challenges based on extensive interdisciplinary collaboration"

The Universitat Oberta de Catalunya (UOC) is developing a new research ecosystem to promote research, technological development and innovation in its Can Jaumandreu building, in the 22@ area of Barcelona's Sant Martí district. The hub aims to become a leading centre of knowledge and frontier research, working in line with the United Nations 2030 Sustainable Development Agenda, which seeks to address the challenges facing global societies in the 21st century.

The UOC was founded 25 years ago as the world's first fully online university, with its pioneering use of the internet as a teaching and research tool. Having consolidated its position as a leader in the knowledge society, the University is now intent on reaffirming its commitment to R&I with the new 22@ research hub, which is expected to open in 2022.

Vice President Aymerich explained that "the hub will bring all the factions of the University's research and innovation activities together and promote synergies that will serve to increase the transfer of research results to society."

The new research hub is supported by the Government of Catalonia, which is co-funding the project to the sum of €1.25 million as part of a grant scheme for the construction of singular institutional R&I facilities. The project includes the redevelopment of 2,915 m2 of the building located at 103 Carrer de Bolívia, which will then become the main site for all the UOC's R&I activities.

This ecosystem, based on three core strategic areas of research – e-learning, e-health and the network society – will unite many of the teams and facilities currently located throughout Barcelona and Castelldefels. This includes the Internet Interdisciplinary Institute (IN3), which specializes in the study of the internet and the effects of the interaction between digital technologies and human activity; the eHealth Center, a transdisciplinary research centre focused on e-health; and the University's e-learning research groups.

"The UOC's strategic areas of research seek to contribute to the exploration of the intersection between social sciences and technology and strengthen the two cornerstones of the welfare state: education and health," stressed Aymerich.

The hub will not only unite the various different research centres and groups, but will also provide them with access to key, pioneering facilities in the Catalan region, with a focus on interdisciplinary collaboration.

These include the Data Science Lab for the management and extraction of knowledge from big data; the Media Lab, which is involved with research, transfer and experimentation in the fields of digital communication, design and culture; the Neuroscience Lab, the neuropsychology and cognitive neuroscience research space; and the UOC Labs, which are remote-access physical laboratories for experimentation that provide instruments, software, hardware and technological support required by researchers in the area of e-learning.

The primary objectives of the new knowledge ecosystem include establishing links with the principal Barcelona-based actors (such as companies or other research centres, as well as the international actors and universities working in the 22@ district) and attracting talent and funding both from Spain and the rest of the world.

In line with the seventeen Sustainable Development Goals (SDGs), the UOC's research hub will also promote citizen participation and encourage the dissemination of scientific output to raise public awareness regarding the relevance of scientific activity.

Marta Aymerich: "The hub needs to work to connect the scientific world and the general public, disseminating research results and promoting citizen participation in relation to research projects."

• Over 500 researchers and 51 research groups work in the University's 7 faculties and 2 research centres: the Internet Interdisciplinary Institute (IN3) and the eHealth Center (eHC).

• The UOC was ranked as Spain's leading online university for research (Ranking CYD, 2020).

• The UOC has seen the third highest growth rate in the volume of scientific papers published in international journals, with an increase of more than 12% (Ranking CYD, 2019).

• The volume of work published by the UOC's teaching and research staff has risen by 15% (Ranking CYD, 2019).

• It is the fourth fastest-growing higher education institution (Ranking CYD, 2019).

• More than 30% of the UOC's scientific output is interdisciplinary (Ranking CYD, 2019).

• The number of international teaching and research staff members working at the UOC has increased by more than 18% (Ranking CYD, 2019).

• E-learning is one of the areas in which the UOC has carried out pioneering research, with 224 e-learning projects conducted between 2001 and 2020 and 20 groups currently involved in research in this field.

• The UOC publishes eight scientific journals, including the open-access International Journal of Educational Technology in Higher Education (ETHE), which is ranked in the top quartile (Q1) in all the citation rankings and is among the highest ranking research journals at international level in the fields of education and technology.

• The UOC's Doctoral School coordinates 8 programmes with around 300 predoctoral research students. More than 200 doctoral theses have been defended since the Doctoral School was opened in the 2014/2015 academic year.

The UOC's research and innovation (R&I) are helping 21st-century global societies to overcome pressing challenges by studying the interactions between ICT and human activity, with a specific focus on the network society, e-learning and e-health. Over 500 researchers and 51 research groups work among the University's seven faculties and two research centres: the Internet Interdisciplinary Institute (IN3) and the eHealth Center (eHC). Marta Aymerich: "The 22@ hub offers us the opportunity to progress toward more transformative research"