Menu
Listen
Michael Murphy: "Countries will only be as successful as their universities will be" 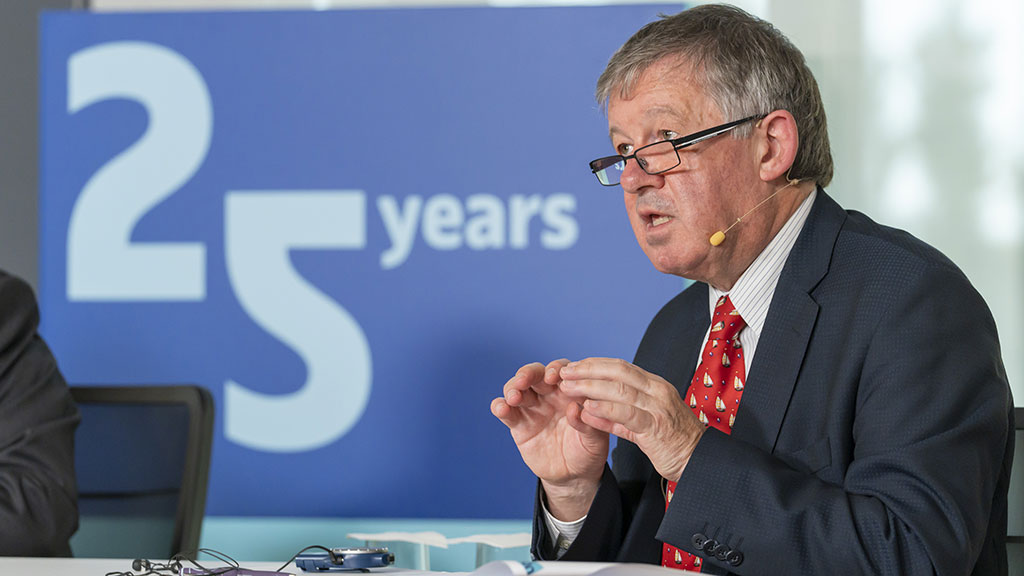 Michael Murphy, a qualified doctor and president of the European University Association (EUA) since 2019, opened the academic year 2022/2023 at the Universitat Oberta de Catalunya (UOC) with the inaugural lecture Universities Without Walls – Adapting to Change in Europe. The lecture was streamed live.

The inaugural lecture was recorded on 4 October, and the participants included Josep A. Planell, the UOC President, Pere Vallès, President of the UOC Board of Trustees, and Gemma Geis, then Minister for Research and Universities of the Government of Catalonia. On 10 October Geis left that role; she was replaced as Minister for Research and Universities by Joaquim Nadal i Farreras on 11 October.

Murphy's speech focused on the future, and he presented the key findings of the Universities without walls – A vision for 2030 report, which is designed to support European universities over the coming decade as they deal with the multiple challenges they face, including climate change, digitalization, demographic changes, social polarization and geopolitical realignments.

When drafting the document, the EUA consulted its 850 members, more than 100 experts in higher education in Europe and around the world, the European Commission, governments, businesses and the civic sector. As well as the challenges, it also found a broad consensus on the ways in which universities must evolve to support society. Murphy said that three key messages emerged as a result. "The first is that our clear and overarching goal must be to support society in attaining the United Nations' Sustainable Development Goals; the second is that diversity is a strength of European higher education, and the third is that Europe's divers universities must be deeply networked – within countries and beyond in the wider world."

What is the future for open universities?

At a time when European university partnerships are considering collaboration models that are applicable to all higher education institutions, the document also addresses some specific characteristics of universities' missions. Murphy explained that every new educational model must treat students in a different way, "as partners in the cocreation of understanding, with peer-supported, problem- and task-based learning. Because how to interpret and how to apply new knowledge, not the acquisition of facts, will be the focus of higher education in the coming years." Likewise, "blended campuses will deliver traditional learning on campuses but coupled with online learning, because that is the only way that universities can deliver lifelong learning effectively and efficiently."

Murphy pointed out that digitalization will obviously be "the key enabler of blended and lifelong learning". In addition, "universities will remain critical to innovation," and there will be a "a much bigger emphasis on a healthier, sustainable research culture, and on stronger ethical frameworks". And in line with what the UOC's proposes, he added that "the most dramatic change in research will be the adoption of open science and open access."

Finally, he pointed out that "the cultural role" is extremely important. "In most countries, universities are repositories of the cultural assets of our societies, and celebrate the unique historical artefacts of our cultures. Our academic staff interpret those artefacts, their symbolism and what they represent. Culture preservation will remain an invaluable role of universities in the future."

According to Murphy, the major question in terms of the challenges they face is whether the institutions will be able to adapt to all these changes in the right way. "The ingredients for success lie in the hands primarily of two actors: universities and governments." The former must focus on two key factors for success: "strong and professionalized leadership" and "research assessment reform".

Meanwhile, governments are crucial because they control two critical factors which enable universities to be successful. The first factor is the regulatory environment: "national systems that maximize the autonomy (with accountability) of universities enjoy the strongest performing systems," he stressed. He also criticized Spain's restrictive regulatory system, which makes it less competitive than its European peers. The second factor is how governments distribute and control resources, without which "ambitions and strategies are merely hallucinations".

Murphy concluded that "in general, those countries that invest in higher education and research are 'the strongest innovators' and 'enjoy the most successful economies' because they know that in this century, in the knowledge age, countries will only be as successful as their universities will be."

Finally, he urged the UOC, an open university that has been without walls since it was established, to be generous when collaborating with traditional institutions that are beginning to make efforts to adapt to the change. "I know that UOC will be an exemplar in sharing," he said.

The UOC – successful in the iron triangle

President Josep A. Planell moderated the last inaugural lecture of his term of office, which concludes in April 2023, and reviewed the successes and challenges for the UOC model. He also recalled that, regardless of the model they select, every higher education institution is subject to the iron triangle of access to university for the new generations, the quality of the teaching provided and cost. Any change made to any one of these three has a direct impact on the other two. He described how the UOC is among the "institutions which, respecting the public mission they've been assigned, see the possible savings technology can bring as a means of reinvesting in building a university that can accommodate everyone, and where quality acts as the guiding star for the teaching and research".

In turn, Pere Vallès, president of the Board of Trustees of the FUOC, congratulated the UOC and its model for the awards they had received that certify their excellence. He stressed "the importance of becoming the first Catalan university and the first online university in Spain to have its full range of official programmes accredited, to have had the digital assessment system validated so that we can move the whole process online, or to have rolled out new teaching roles, such as the first-year tutors or the professional careers advisors. These precedents highlight the value of accountability and, likewise, mean the rest of us need to take a look in the mirror and try to emulate them."