Menu
Listen
Francesca Bria: "The future should be digital, democratic and zero emissions" 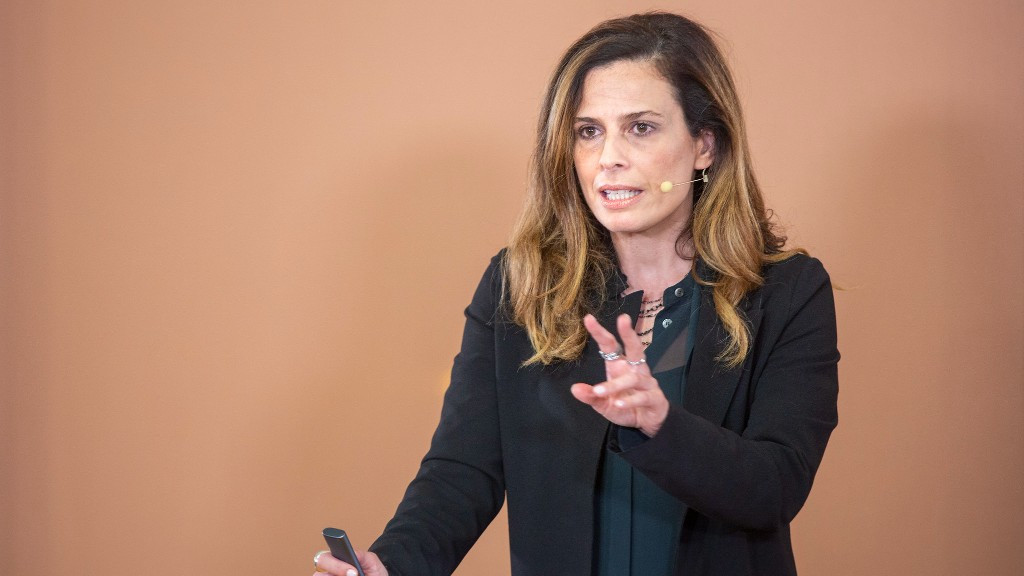 Francesca Bria, an expert and advisor in innovation and digital policy, led the ceremony to open the UOC's academic year 2021/22 with an inaugural lecture titled "A digital green deal for Europe's technological sovereignty". Held at the 22@ campus's Can Jaumandreu auditorium and live-streamed to an audience online, the event was chaired by Josep A. Planell, the UOC President, and speeches were given by Pere Vallès, President of the FUOC Board of Trustees, and Gemma Geis, the Catalan Government's Minister for Research and Universities.

Bria based her presentation on the opportunities arising following the pandemic to rethink digital technology and innovation, and to steer towards a more democratic and sustainable future. Her proposal for this is a new model of digital sovereignty, a "digital green new deal".

She explained that, considering the excessive levels of government surveillance – denounced by figures from across society and academia – and the uses and abuses of technological breakthroughs, the kind of power that platforms exercise "is not well understood yet by our system. We don't have the right tools to curb this power, to regulate it and to put technology at the service of people and human development."

How is Europe responding to this situation? For Europe today, "to be the regulatory superpower is no longer enough", because despite it being very important to address the need for regulations, "the EU also needs to remain relevant as a global economic power through its scientific and technological innovation, grounded in democratic values". Bria also stressed that "digital regulation should come from the sovereign people, from accountable government, and cannot be done by a digital oligarchy".

The ambitious green new deal for Europe project is based on a growth strategy that seeks to decarbonize our economy and achieve climate neutrality by 2050. Bria explained how one of the transitions that is happening relates to digitalization, how in Europe "we see, at the regulatory level, very important aims […] I think Europe is probably the only continent that is putting forward a new constitution for the digital times." She underlined how important it is that the new European regulations aim to put "an emphasis on citizen welfare, and not only consumer welfare".

In this context of European efforts to launch a more competitive regulatory framework for the digital economy, Bria talked about the Gaia-X project, the goal of which is to build a European cloud system and establish a grade A standard for data security, data sovereignty and interoperability. She said that "with Gaia X […], we can get to a model of a European data trust that represents a fair and more equal data economy for all of us so that we can increase access to data while keeping trust to citizens and keeping privacy and security ethics and preserving the fundamental rights of citizens."

The future of digital

Before her current roles as chair of the Italian National Innovation Fund and advisor to the New European Bauhaus, Bria was Barcelona's Chief Digital Technology and Innovation Officer from 2016 to 2019. She mentioned two successful projects from that time, projects that are now providing models for data sovereignty in the European context.

One was the Decidim Barcelona participative platform, conceptualized by the Internet Interdisciplinary Institute (IN3). Developed locally, this tool has now become a leading example of how to use data for purposes that benefit society, improving cities and making them greener, fighting climate change, and moving towards sustainable mobility, affordable housing and better democracies. The other was the Decode platform, which helps individuals control their personal data, with options to keep it private or share it for publicly beneficial uses.

Bria concluded her presentation by highlighting Europe's opportunity to plot a path based on "big democracy", with neither big tech nor big state having full control over our data. Europe "can show how this European digital humanism, with a unique European touch to innovation can work", she said; "We do need a new social contract. […] In this context, digital sovereignty means that as a society we should be able to set the direction of technological progress and put technology and data at the service of people, society and the ecological transition," and making this a reality requires a political programme and a wide range of alliances.

The UOC, learning and transforming

The venue chosen for the inaugural lecture was the Can Jaumandreu auditorium at the 22@ campus, where the UOC is now concentrating all of its research and teaching activities, thus enhancing interdisciplinarity, creativity, connectivity and dissemination. The UOC president, Josep A. Planell, used his speech to call attention to the role the University can and must play in the current context of digital transformation, reiterating that the UOC "brings high quality higher education within reach, adapting it to the needs of individual students and providing lifelong learning opportunities; we are bringing to life the European motto of: 'leaving no one and no place behind'."

The President of the FUOC Board of Trustees also made a speech, in which he cited a famous line from Jules Verne, "mobilis in mobili – moving in a moving thing, or in terms of the UOC, learning and transforming." He eulogized the versatility of the research into interactions between digital technologies and human activity, the institution's adaptability in the face of major challenges, the ambitiousness of initiatives such as the Hac Te Barcelona Art, Science and Technology Hub, and the quality that sees nine out of every ten UOC graduates being in highly qualified jobs.

The final speech was given by the Minister for Research and Universities, Gemma Geis, who talked about the importance of the Government of Catalonia having reinstated this ministry. "But more than the office", she said, the emphasis must be on "our duty as a country to put knowledge and learning at the centre of our policies for economic and social recovery." To make this a reality she promised increased funding for research, an area she described as fundamental to societies' progress and development.

The ceremony was also used to present a video report of the academic year 2020/2021, covering highlights from the past year. These included the celebrations of the UOC's 25th anniversary, contributions to the digital transformation of education, and efforts invested in promoting R&I.

Committed to the digital transformation of education