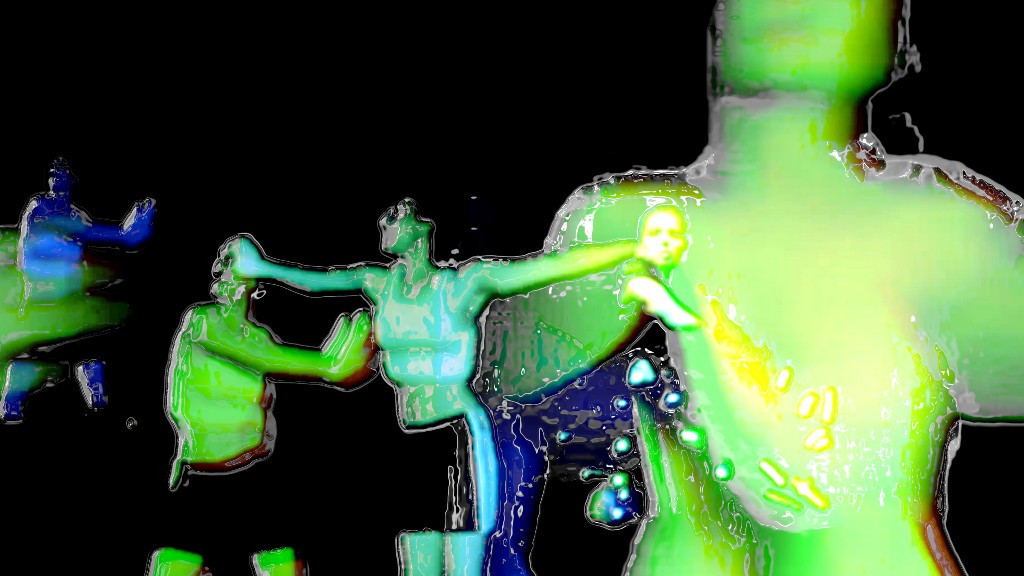 Over 50 activities open to the general public round out the programme and stretch it across Catalonia. (photo: Konic, al Mercat de les Flors / Rosa Sánchez)

Over 50 activities open to the general public round out the programme and stretch it across Catalonia. (photo: Konic, al Mercat de les Flors / Rosa Sánchez)

Organized by the UOC, the symposium will host presentations, panels, workshops, artist talks and performances at the CCCB and the MACBA, as well as an exhibition of artists from around the world at Santa Mònica

The UOC will be holding ISEA2022 Barcelona, the 27th International Symposium on Electronic Arts, from 10 to 16 June 2022 in Barcelona under the theme of "Possibles". Collaborating in the event are the Barcelona Centre of Contemporary Culture (CCCB), the Santa Mònica, the New Art Foundation, the new art, science and technology hub Hac Te, the Barcelona Museum of Contemporary Art (MACBA), Barcelona City Council (through Science and Universities and the Institute of Culture) and the Catalan Ministry of Culture.

ISEA is one of the longest-running annual events internationally, serving as a meeting point to explore the direct intersection between art, design, science, technology and society. Globe-trotting around the world to cities such as Montreal, Durban, Manizales, Hong Kong and Sydney, ISEA has allowed artists, scientists, technologists and theorists to share their research and latest prototypes, technological breakthroughs and artistic works linked to science and technology.

After more than 10 years away from Europe, ISEA2022 will land in Barcelona this summer thanks to the involvement of an enthusiastic local and international community. The event will strengthen Barcelona's position as a leader in research, scientific production, knowledge creation and cultural creativity, both at home and abroad, having recently regained its status as the cultural and scientific capital of Spain.

ISEA2022 Barcelona invites participants to join the growing debate on what is possible in today's world, not only by exploring the future we need to build, but also by opening the doors to the past and the present through four sub-themes. The first, "Human and Non-Human", delves into our relationship with machines and animals; the second, "Natures and Worlds", explores climate change and the viability of living off-world; the third, "Futures and Heritages", considers the role of history and data excess; and the last, "Educations and Societies", raises challenges such as how to embrace art as a part of scientific and technical knowledge.

The ISEA Conference, the more academic part of the event, will include keynotes, panels, institutional presentations, artist talks, performances, screenings and workshops honing in on the intersections between art, science, technology and society. Among those invited to share their latest research are Estelle Schorpp, Chris Muller, Karla Brunet, Julian Stadon and Rocio von Jungenfeld. The programme items were selected by a committee of more than 200 experts from around the world after reviewing the 1,000 entries received through the public call for proposals.

Most of these activities will take place at the CCCB, which will play host to paper and poster presentations, panels, screenings and demos every day from 10 to 16 June on-site, and on the last day of the event online. These sessions will address current issues such as the creative capacity of artificial intelligence, the possibilities of immersive experiences, the imaginary of biotechnologies in the arts, the predictive potential of machines, new ways of managing our heritage and milestones in human-robot communication. To top things off, the CCCB will host workshops and performances for the general public.

On 10 and 11 June, the MACBA, as part of its Possible Archives project, will play host to a landmark international archiving summit called the Second Summit on New Media Art Archiving. In addition, throughout the event, the Convent dels Àngels exhibition hall will house a laboratory-relational space that will be used for workshops, artist talks and one performance. The space will be open to citizen initiatives such as Cultura Viva's Open Archives and pay special attention to memory projects focused on the Raval neighbourhood.

Also, The ISEA International Advisory Committee is organising an open discussion that invites to reflect on ISEA’s past and help define its future.

ISEA2022 Barcelona will bring together a splendid display of new electronic media and emerging arts, such as immersive installations, interactive and online works, animations, performances and screenings, all linked to the intersections between art, science and technology. The selected artworks also fit the symposium's theme, "Possibles", and challenge visitors to question the relationship they have with their bodies, non-humans and the planet, among other themes.

The main ISEA2022 exhibition, titled The irruption, will run at the arts centre Santa Mònica from 9 June to 21 August. It was curated by Marta Gracia, Jara Rocha and Enric Puig Punyet and will display over twenty pieces selected from the call for proposals. Set within the local context and the centre's own landscape, they will give pause for thought on the complex circumstances that the planet is experiencing after the major disruption caused by the pandemic. Proposals by renowned international and local artists such as Robertina Šebjanič, Eric Berger, Joan Soler-Adillon and Andy Gracie will be on display. Following Arts Santa Mònica's new approach, which encourages horizontal participation, discursive itineraries will emerge while the exhibition lasts through multi-level participation and the involvement of the centre's communities of resident artists.

Over 50 activities to enlighten the public about the intersections between art, science and technology

In an effort to give the general public a chance to explore the intersections of art, science and technology, ISEA2022 Barcelona and Hac Te have created the ISEA City/Territory programme to offer over 50 activities across Catalonia with support from Barcelona City Council and the Catalan Ministry of Culture.

ISEA2022 has already confirmed some activities, including noteworthy collaborations with leading organizations from the world of design. From now until 10 April, IED Barcelona is organizing multiple sessions of Designing for the Many, an interdisciplinary laboratory set up by master's degree students to research how design impacts the construction of society. From 2 June to 28 August, Foment de les Arts i Disseny (FAD), an association of design professionals and companies, will present The Year's Best Design, an exhibition showcasing design highlights from 2021. In addition, on 17 June, it will host the FAD Forum, a day of talks revolving around artificial intelligence, art and design. On 7 June, the network of higher education design institutions for social innovation and sustainability Educació per al Disseny per Viure (EDIVI) will reflect on people- and planet-centred design as the key to a sustainable future.

Also involved are performing arts venues such as Sala Beckett, which has partnered with the UOC to put on a series of talks and performances around artificial intelligence and creation 'Màquina Persona', and Mercat de les Flors, which will host performing arts creations fusing dance and technology by Konic Thtr 'Intel·ligències múltiples In_Exo Corpòries'; (10 and 11 June) and Instituto Stocos' Embodied Machine (11 and 12 June).

Places in the city for emerging creation will also play a prominent role in ISEA2022. One such place is La Capella, which will host an exhibition fostering dialogue between works by artists from Barcelona Producció (Anna Pascó, Ariadna Parreu and Mario Santamaria) and pieces by local creators such as Josep Manuel Berenguer, Anna Carreras, Mónica Rikic, Roc Parés and Yolanda Uriz, who were picked through the ISEA2022 call for proposals.

In addition to cultural facilities, the programme includes sites in Barcelona such as the Canòdrom, which on 16 June will play host to a series of panels with international experts on topics such as cryptocurrencies and digital arts and the STEAM approach in higher education. Over the course of the event, from 10 to 16 June, CosmoCaixa will put on three screenings in its planetarium as part of the NEO programme, which brings together disciplines in science and technology to tackle today's major challenges using cutting-edge artistic practices. These screenings will be carried out by visual artist Alba G. Corral, Onionlab and Daniel Cervenka, Signal Productions and Planetum (Prague Planetarium).

ISEA2022 is not bound to Barcelona, however. With the direct impulse or through its support, the Ministry of Culture's Directorate-General for Innovation and Digital Culture intends to extend the event to the territory with the aim of facilitating access to digital art and culture proposals all around Catalonia.

In fact, Reus will be one of the event's main satellite sites in Catalonia. From 26 May to mid-July, and in collaboration with New Art Foundation, Cal Massó will host an outstanding exhibition curated by Roberta Bosco and Stefano Caldana. It will showcase the latest digital artwork added to the .BEEP {collection;} and display the result of one of the production grants awarded by ISEA2022, Rain beats by Josecarlos Florez. The centre will also play host to workshops and talks by artists participating in the event, as well as offering guided tours through its facilities, both for local residents and international visitors. That's not all, though. On 26 May, a mapping design by Alba G. Corral will be projected onto the façade of one of the great Art Nouveau gems in Reus, Casa Navàs.

Other initiatives to bring the program closer to citizens will be organized in various Catalan cities. This is the case of Girona, where it will take place a workshop of deep fakes by Estampa in Bòlit contemporary art centre on 18 June. In it, the participants will use photos of themselves to create avatars with the ability to speak and express themselves. Over the next few weeks there will also be announced a programme of events at facilities belonging to the Public Network of Visual Arts Centres and Spaces, such as Lo Pati (Amposta), La Panera (Lleida), El Mèdol (Tarragona) and the MAC (Mataró), and in other Catalan centres as Konvent (Berga) or PLANTA (Balaguer).

A detailed programme of the first confirmed activities for ISEA2022 is now available at https://isea2022.isea-international.org/.

A round table discussion on art and science in the pandemic launches Hac Te, Barcelona's Art, Science and Technology hub

"Art and science share a common drive to explore"