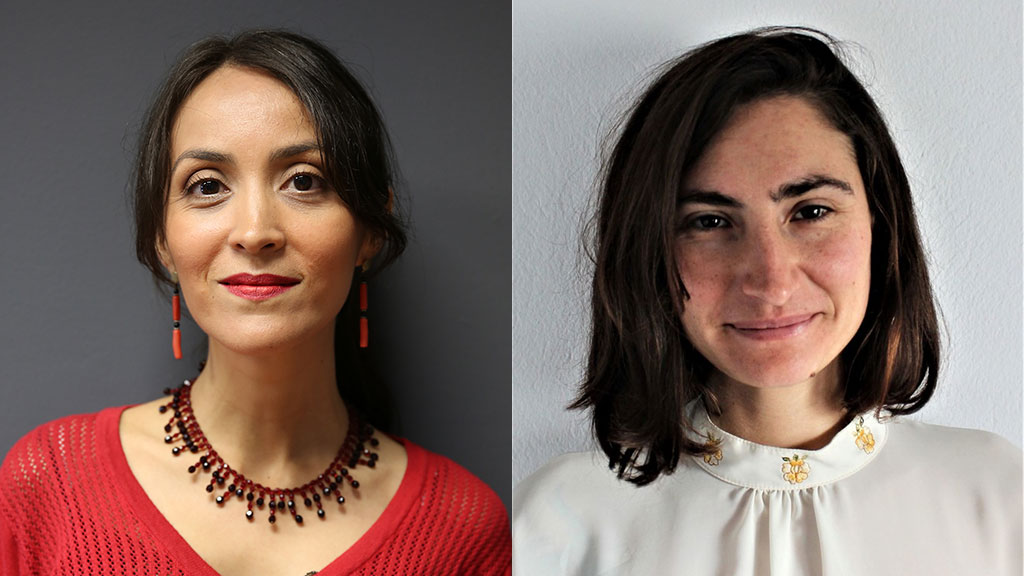 The new generations of film history researchers seek to challenge the exclusively Eurocentric and Western narratives that have historically dominated the study of film. New perspectives, which aim to be more global, inclusive and digital, will be presented at the international conference Rethinking Film History Through Global and Digital Approaches (Early 1920s - Early 1970s), which will be held from 4 to 7 October at the Universitat Oberta de Catalunya’s (UOC) Can Jaumandreu building (Carrer Perú 52, Barcelona) and the Biblioteca de Catalunya (4 October).

We talked to two of its organizers, Diana Roig-Sanz, ICREA Research Professor and leader of the Global Literary Studies Research Lab (GlobaLS) at the Faculty of Arts and Humanities and the Internet Interdisciplinary Institute (IN3), and Ainamar Clariana Rodagut, a GlobaLS postdoctoral researcher. They both took a critical look at the historiography of film over recent decades and explained their research at the UOC, which uses digital tools and data, and applies a new global and gender perspective.

What are the aims of the conference and your expectations?

To contribute to the development of global studies and digital humanities applied to film studies, with a very particular focus on the history of film. We believe that some of the theories developed over the last 20 years around the concept of "global" and the digital tools we are now using, particularly in the area of Digital Humanities, can challenge discourses based on a very restrictive idea of what a "nation" is - which often fails to take transnational relations into account – and on a very Eurocentric and Western point of view.

We want to encourage a new generation of film history researchers to study global, plural and varied phenomena to give international recognition to the fact that there are Latin American, Asian and African film historiographies at the same level as the European one, for example. This viewpoint, which works hand in hand with an ethical, interdisciplinary and gender-based point of view, aims to draw attention to the stories of many women whose experiences have, until now, been ignored.

Our goal is to favour the institutionalization of global film studies, a still-emerging field of study, to include this global viewpoint based on interactions and interrelations.

How are traditional historians responding to the viewpoint of the new generations of film history students and their wish to challenge previous discourses?

It depends on the context and historiographical traditions. In Catalonia and Spain, the predominant tradition in film studies is mainly based on aesthetics. In other words, the main subjects of study are film genres and aesthetics. Whereas, sociological aspects have been left aside, unlike what happens in other places, such as Latin America, where there seems to be a greater interest in writing a cultural and social history of filmmaking.

Digital perspectives (i.e. the use of datasets and metadata to study film-related phenomena), unlike what is starting to occur in countries such as Germany, the Netherlands or the United Kingdom, are not widespread here, but there is a new generation of researchers, like us, who are working on them.

What are the challenges posed by this new perspective in the study of film history?

The main challenge is finding and identifying records, as they're scattered or impossible to find, either because they don't exist at all, because they haven't been catalogued or because they can't be accessed. Records often still belong to the families of the people we are studying and are kept in various libraries around the world or held by collectors. If they're not digitized and we can't consult them, it's hard to provide empirical evidence of what we think probably happened. This means that, sometimes, our hypothesis or beliefs can't be proven beyond a reading and analysis of the records of other actors of the time who interacted with the subjects of our study.

What contributions can the gender perspective make to the history of film?

It makes us aware of the significance of women in the history of many disciplines. In our case, researching women's contributions to filmmaking helps rewrite the history of this art form by taking into account the previously ignored other half of the population so that we can study hitherto undervalued contributions. The biographies currently in circulation are still dominated by a history that focuses on the life and works of the most famous people in the film world, who are usually European or American white male directors.

Our proposed viewpoint seeks to reconstruct production, distribution and creation as collective processes that are only possible thanks to a web of connections in which each individual plays a key role. Our research enables us to recover these hidden success stories. This approach to the history of film puts into context the author-based perspective according to which the author of a work is considered solely responsible for it, even in a work of art as large and complex as a film.

Can you share a few examples of women's roles in filmmaking that have been ignored?

Since the early days of film, women have played very significant roles, as directors, screenwriters, producers and film critics. The problem is that men gradually started taking on more and more positions of power, removing women from their positions of responsibility. One of the causes of this displacement was the financial development of the film industry, which was key in helping men with more social capital appropriate the most publicly visible roles and relegate women to, at most, the role of actresses. In spite of their relegation to this marginal role, women continued to work in filmmaking from less visible positions, for example by working as magazine editors, writers or script reviewers, by founding film clubs, as cultural patrons and presenters, as decorators, make-up artists or heads of costume departments, and so on.

What are the differences between the feminist films of the 1970s and the ones being made today?

Films aimed at women and with their involvement were already being made before the 1970s. However, it wasn't until the 1970s that people started talking about feminist films, which aren't the same as films made for women. The feminist film category is only used in certain contexts, and not all female directors feel that their works can be labelled in this way.

What changes do we need to make in order to study the history of film from a decolonized point of view?

We need to take a more flexible look at what we're studying and break away from the idea that filmmaking developed in one central location, be it France or Hollywood, and was then imitated in what is mistakenly referred to as "peripheral locations". There was no single creative centre and a set of peripheral locations that imitated it. Instead, there were exchange processes evolving at different speeds and with shared - but also distinct - characteristics around the world.

Our aim of decolonizing the history of film starts from a relational approach based on exchanges and transfers, giving particular weight to creating knowledge as a result of a collective process.

Why have films made in the Global South been historically undervalued? Is this simply about a smaller film production, or is it a case of conscious (racist) discrimination?

The film industry’s more significant development in the Global North, particularly Hollywood, shouldn't be enough to consider US or European cinema to have greater legitimacy or symbolic capital. Take French cinema, for example. In spite of being financially and technologically stronger, the US film industry has not been able to stop French films from being surrounded by an international aura of quality and prestige throughout history. The legitimacy of film is therefore not just about the development of the industry but also about the legitimacy conferred by people on the culture and filmmaking of a given territory.

Thus, although there are very important national film industries beyond Hollywood, such as Bollywood, Nollywood (Nigeria) or the Egyptian film industry, their work hardly ever reaches us because they haven't been blessed by the legitimating powers that be from their European and US headquarters, such as the international film festivals or some film production and distribution companies. Aspects falling outside the sphere of filmmaking itself, such as geopolitical issues, the financial aspect of filmmaking, cultural and even religious aspects, are also relevant.

What does it mean to look at film history from a digital perspective? What does this perspective seek to contribute?

It means working with the data and metadata made available by digitized records, film library catalogues, repositories and various types of documents, such as collections of letters. This can help decentralize and decolonize the history of film, because the datasets will enable us to put some preconceived ideas into context. For example, they can shed light on the work of a little-known cultural mediator.

Or it can show, through a social network analysis (SNA), the key role (or otherwise) of a particular agent. For example, we can see whether someone played a significant role in the distribution of a film as a result of their contacts in the film industry. This conclusion could also be drawn using other qualitative methods, but it would involve a longer and more complex process. Digital tools enable us to analyse an amount of data that a single researcher could never get through in a lifetime. These data can be used to identify patterns, such as those underlying the structure of a field or a certain time in history or that worked for a while but then stopped working.

What are the risks – including those of artificial intelligence – of working with digital tools?

Using large datasets entails significant risks in terms of how representative the data are. The extent to which materials are digitized is not the same everywhere. It's a well-known fact that the agencies that fund research give priority to the digitization of some records to the detriment of others. Access to digitized data therefore varies greatly between geographic areas and is less easy to access in some places, such as Latin America, which is our main focus of geographical interest. Another risk is lack of access to the records needed for one's research, a common occurrence with the records of many women linked to the world of film.

We need to be aware of these inequalities in access to data in order to avoid biases, offering honest research with awareness not just of the potential of data but also of their limitations.

How important have film clubs and amateur filmmaking been in the history of this art form? Has their relevance been sufficiently acknowledged?

The historiography of film hasn't taken film clubs and amateur filmmaking into account as much as it should. One of the main reasons for this is precisely the effort made to write an author-centred history of film to the detriment of one that highlights the work of other players too.

Film clubs have always been places for the creation of collective knowledge, particularly when they first appeared in the early 20th century. They were usually collectively managed places run with no or little financial profit, another reason why they've never been the subject of much research.

And the case of amateur filmmaking is similar. Amateur filmmakers haven't always been famous people. Their projects weren't profitable, which is part of the reason amateur work tends to be undervalued.

"In the audiovisual world, all women in general suffer discrimination"