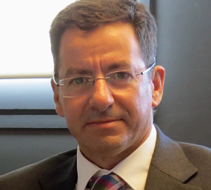 Antoni Cahner has a bachelor's degree in Physical Sciences from the University of Barcelona, an MBA from ESADE and a GMP from IESE. He held the position of vice president of systems integration at T-Systems until July 2014. Cahner held a number of executive positions in the field of higher education management, first as director of business development at GEC, SA, and later as general manager of Planeta UOC SL and assistant general manger of the UOC from 2001 to 2005.