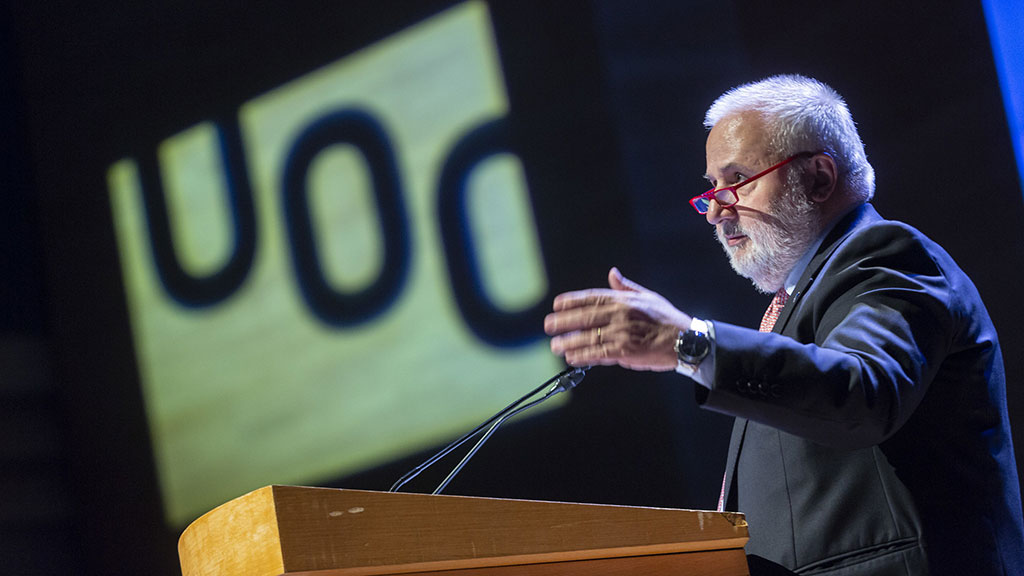 April 2023 marks the end of the period in office for the current president of the Universitat Oberta de Catalunya (UOC), Josep A. Planell.

April 2023 marks the end of the period in office for the current president of the Universitat Oberta de Catalunya (UOC), Josep A. Planell.

April 2023 marks the end of the period in office for the current president of the Universitat Oberta de Catalunya (UOC), Josep A. Planell and the Fundació per a la Universitat Oberta de Catalunya (FUOC) has started the process to recruit his replacement. As required by the Statutes, the FUOC Board of Trustees has appointed a Search Committee made up of four trustees, which has set the profile to be met by candidates and appointed a Selection Committee, composed of three internationally renowned experts, charged with selecting a shortlist of candidates from among the applicants. Candidates can submit their applications until 30 September.

The Selection Committee is made up of Belinda Tynan, Jaume Valls and Xavier Prats-Monné, who will be responsible for submitting a report with their proposals to the Search Committee. The Search committee will then present three final candidates to the Board of Trustees. It shall ultimately be this Board that will, in a plenary vote, select the person to become the university's top academic authority for the next seven years, as established by the university's Statutes. The appointment of the new president will then be ratified by the Government of Catalonia at the request of the FUOC Board of Trustees, after giving hearings to the FUOC Advisory Board and to the University Council (the university community's highest participatory body).

The new president must be an academic (full professor or equivalent), with an outstanding teaching and research career, reflected in widespread international recognition, and with proven senior management experience. The successful candidate must be committed to the UOC's mission, principles and values: they must have a global vision and in-depth knowledge of the higher education sector at both local and international levels. They will represent the university and be in charge of leading its current and future strategy. They must ensure that the university's research and teaching programmes meet the highest academic quality standards, while maintaining and strengthening the university’s international leadership in its core missions.

The UOC was created in 1995 under legislation approved by the Government of Catalonia as the world's first online university. Its mission is to let technology open the door to high-quality university education for everyone, with merit as the sole criterion.

The UOC will conclude the 2021/2022 academic year with more than 95,000 graduates and close to 90,000 enrolled students from 141 countries. Currently, the university offers more than 800 teaching programmes spread across seven areas of knowledge. It boasts a growing team made up of 544 members of faculty and research staff, 873 members of the administrative staff and 6,500 people offering their services as course instructors and tutors.

Research is an essential part of the UOC's mission

The UOC focuses its interdisciplinary research on the interaction between technology and the social and human sciences. The research is conducted by over 500 researchers and 51 research groups distributed between its faculties and research centres. It is the highest rated online university in Spain according to the CYD ranking, the leading online university in Ibero-America and one of the 200 best young universities in the world, according to Times Higher Education.

The UOC's vision of the future is shaped by its ambition to transform higher education in the digital age. This is rooted in its firm belief that universities must attain a strategic role and a greater social impact by acting as hubs that share knowledge among the different figures in society.

The UOC's strategy is based on a series of strategic plans. In the fourth quarter of 2019, the UOC began a participatory process to draw up its 2022-2025 Strategic Plan. This new plan, which will take over from the 2014-2021 Strategic Plan that was previously in force, will provide the organization's roadmap for the coming years.

As a not-for-profit foundation, the UOC provides a public service but is organized in accordance with the principles of private management. Its income comes from enrolments and the funds obtained for research projects. The Government of Catalonia subsidizes part of its budget by means of a programme agreement linked to objectives.

Recently, current UOC President Josep A. Planell appeared before the Catalan Parliament's Research and Universities Committee to take stock of the work done, explain how the projects under way are progressing and look ahead to the challenges and strategic priorities for the coming years.

She is a Non-Executive Board Member of Aspire Learning Resources (since February 2022) and Principal Advisor to Deloitte (since May 2022).

She was Executive Director at the Commonwealth of Learning (2019-2022) and boasts a long career in the field of university management at a number of higher education institutions. Especially noteworthy have been her senior management roles at RMIT Online and at the Distance Education research centre of the University of New England.

Between 2018 and 2021, he chaired the Social and Legal Sciences Specific Committee of the Institutional and Programme Assessment Committee (CAIP) of the Catalan University Quality Assurance Agency (AQU Catalunya). In November 2021, he was appointed Director of AQU Catalunya.

Prats Monné is a graduate in Social Anthropology (Complutense University of Madrid), Development Economics (International Centre for Advanced Mediterranean Agronomic Studies in France) and European Studies (College of Europe in Bruges). He holds an honorary doctorate from the Universitat Rovira i Virgili (2019).

Since 2018, he has been special advisor to Teach For All, a global non-profit organization whose mission is to expand educational opportunity around the world. He is also President of the Europe Committee of the King Baudouin Foundation, and Chief Advisor to the Board of the European Institute of Innovation and Technology (EIT-Health).

Previously, he worked for over 10 years at the European Commission in different areas of political responsibility involving the modernization of European education and learning systems, mobility and cooperation in education, including (among other aspects) the Erasmus programme and international relations in the fields of education, culture and youth.

The offices he has held include Director General for Health and Food Safety (2015-2018), Director General (2014-2015) and Deputy Director General for Education and Culture (2010-2014), founder member of the European Commission's Impact Assessment Board (2007-2010), Director for Employment Policies, Strategy and International Affairs (2007-2010), Director of the European Social Fund and advisor to the EC Commissioner for regional policy (1999-2001). He was also Deputy Director of the Office of the Vice President for International Relations (1995-1999) and deputy spokesperson for President Jacques Delors.